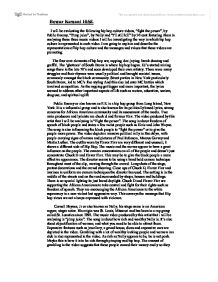 Compare the ways in which hip hop culture is represented in three hip hop music videos.

Bewar Kawani 10SE I will be evaluating the following hip hop culture videos, "fight the power", by Public Enemy, "Pimp juice", by Nelly and "I'll still kill" by 50 cent featuring Akon in analysing these three music videos I will be investigating the way in which hip hop culture is represented in each video. I am going to explain and describe the representations of hip hop culture and the messages and values that these videos are promoting. The four core elements of hip hop are; rapping, dee-jaying, break dancing and graffiti. The 'ghettoes' of South Bronx is where hip hop began. DJ's started mixing songs there in the late 70's and soon developed their own artistry. There were many struggles and their rhymes were usually political and brought societal issues, commonly amongst the black community. Street parties in New York particularly South Bronx, led to MC's free styling And this also led onto MC battles which involved competition. As the rapping got bigger and more important; the lyrics seemed to address other important aspects of life such as racism, education, sexism, drug use, and spiritual uplift. Public Enemy or also known as P.E. ...read more.

A close up of dice is shown in the beginning; straight away this highlights the significance of the dice and a lot of wealth. A two shot with Nelly close to the camera and another woman in the farer side is a technique used by the director which portrays males as very dominant and signifies women as objects. The first message being conveyed in this video is the important of money and gambling in hip hop culture. Another message being conveyed throughout this video is that women have sexual and non sexual sides, but the sexual side is portrayed more in hip hop videos to emphasise male dominance and money. [266] Curtis James Jackson, or also known as 50 cent, his stage name is an American rapper. His origin was south Jamaica, queens. He was a drug dealer at a young age but then started to pursue a rapping career. The music video produced by this artist that I will be analysing is "ill still kill". The song is about a violent culture in prison and that when they come out their still who they used to be and won't hesitate to kill people. ...read more.

Nelly focuses on wealth and women, while 50 cent focuses on violence and prison life. However they both emphasise on male dominance in different ways. Nelly shows the male dominance over women. We can see this from a two show of Nelly and another woman in which Nelly is closer to the camera than the women. Alternatively 50 cent shows male dominance of violence. We can see this from his lyrics and the fact that no women are featured in the video clip, as this may be because women would make him look weaker and softer. 'Pimp Juice' portrays the message that money is everything and women crave for people with money and power. Correspondingly 'I'll still kill' portrays the message that Akon and 50 cent have a violent and criminal nature. It also symbolises the hatred of enemy and agrees with violence being used against them to overcome hatred. In conclusion I believe that hip hop culture can portray different messages. By these videos I have also been introduced to the different aspects of hip hop genre. It is common in hip hop culture for women to be used as objects and that portrays wealth and money too. The videos changed from aggressive but non violent to aggressive. ...read more.