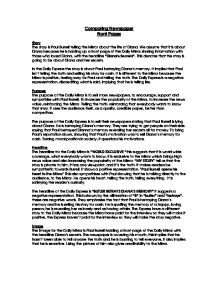 Comparing Newspaper Front Pages Story The story is Paul Burrell telling the Mirror about the life of Diana. We assume that it is about Diana because he is holding up a front page of the Daily Mirror sharing information with those who loved Diana, with the headline "Diana's Secrets". This denotes that the story is going to be about Diana and her secrets. In the Daily Express the story is about Paul betraying Diana's memory. It implies that Paul isn't telling the truth and selling his story for cash. It is different to the Mirror because the Mirror is positive, feeling sorry for Paul and telling the truth. ...read more.

To bring Paul's reputation down, showing that Paul's motivation was to sell Diana's memory for cash. Turning moral position in society, it questions his motivations. Headline The headline for the Daily Mirror is "WORLD EXCLUSIVE "this suggests that it is world wide coverage, what everybody wants to know, it is exclusive to the Mirror which brings high news value and also increasing the popularity of the Mirror. "MY STORY" tell us that the story is private to him, it has one viewpoint, and it's the truth. It makes readers be sympathetic towards Burrell. It shows a positive representation. "Paul Burrell opens his heart to the Mirror" This also sympathises with Paul showing that he is talking directly to the audience, to the Mirror. ...read more.

Image The image for the Daily Mirror is Paul Burrell holding a front page of the Daily Mirror with the headline Diana's secrets. The newspaper is covering his mouth, this implies that he hasn't been able to tell anyone the truth and he is bursting to tell everyone, it also implies that he is secretive. Using the picture of him also gives creditability to the Mirror. The Daily Express doesn't have an image to go with their story. This might be because their story is based on hearsay, no picture means no proof. They are discrediting what is said. They think that they don't need a picture because it's not important. Paul is betraying Diana's memory so they don't want his dirty, horrible, secretive face on the front of their newspaper, and they don't want to promote him. ...read more.