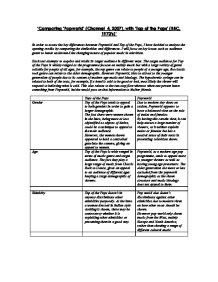 'Comparing 'Popworld' (Channel 4, 2007), with 'Top of the Pops' (BBC, 1970's)' In order to assess the key differences between Popworld and Top of the Pops, I have decided to analyse the opening credits by comparing the similarities and differences. I will focus on key issues such as audience genre to better understand the changing nature of popular music in television. Each text attempts to acquire and retain its target audience in different ways. The target audience for Top of the Pops is widely ranged as the programme focuses on mainly music but with a large variety of genre suitable for people of all ages, for example, the rap genre can relate to people of a younger age, the classic rock genre can relate to the older demographic. However Popworld, tries to attract to the younger generation of people due to its content of modern age music and ideology. ...read more.

Age Top of the Pops is wide ranged in terms of music genre and target audience. The fact they play a large range of music from Classic Rock to Dance, gives an appeal to an audience of different ages keeping a large demographic of viewers. Popworld, as a modern age pop programme, tends to appeal more to younger viewers as well as having young age presenters. The older generation are more or less excluded from the popworld demographic as the shows structure and music ideology does not appeal to them. Ethnicity Top of the Pops doesn't in anyway discriminate other ethnicities purposely. At the intro a woman dressed in Indian style clothing is shown, there may be controversy whether it is exploiting other ethnicities or presenting them in a good way. Pop world also doesn't discriminate against other ethnicities due to modern views on how other races should be shown. ...read more.

Gender is represented in both Top of the Pops and Popworld. Women back in the 60's/70's were more or less objectified and were being exploited to most men. A woman shown in the intro of TOTP is shown gazing into the camera, this can be seen as exploitation of women but on the other hand can be seen as a post-feminist view as she holds control over the males watching the programme due to her powerful gaze. The hegemonic view back in the 70's was for men to be masculine and women feminine/objects of desire. However modern music programmes such as Popworld tend to have more equality in the role of males and females due to the 'indie' culture. While Top of the Pops remains structured and keeps within the constructs of its genre, Popworld can be read as a Postmodern text ...read more.