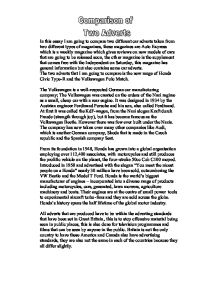 In this essay I am going to compare two different car adverts taken from two different types of magazines, these magazines are Auto Express which is a weekly magazine which gives reviews on new models of cars that are going to be released soon, the other magazine is the supplement that comes free with the Independent on Saturday, this magazine has general information but also contains some car adverts. The two adverts that I am going to compare is the new range of Honda Civic Type-R and the Volkswagen Polo Match. The Volkswagen is a well-respected German car manufacturing company; The Volkswagen was created on the orders of the Nazi regime as a small, cheap car with a rear engine. It was designed in 1934 by the Austrian engineer Ferdinand Porsche and his son, also called Ferdinand. At first it was called the KdF-wagen, from the Nazi slogan Kraft durch Freude (strength through joy), but it has become famous as the Volkswagen Beetle. However there was few ever built under the Nazis. The company has now taken over many other companies like Audi, which is another German company, Skoda that is made in the Czech republic and the Spanish company Seat. ...read more.

shows, the car is a 3-dr which is ideal for the sort of person that is looking to buy a new reliable car from a well respected company, cheap have good offers and are quite cheap and when selling the car you will find that will hold their value very well. At the bottom of the advert, which was taken from the magazine "Auto Express", the magazine is weekly magazine, which has reviews of all the new design of cars that are going to be released in the near future, has a caption stating the special offer which the car is on, how to find your local dealer and the web site address which is where you will be able to find any more information that may be requested by the person interested in any more of the cars available from the Volkswagen company. The setting for the Honda Civic Type-R is on a computerised background with a small Honda badge in the top right hand corner and in the bottom two corners there are other Honda badges and the Type-R logo in the other corner at the bottom, in between the two logos at the bottom of the advert there is also a caption, which contains general ...read more.

The cartoon pictures in the advert do not actually show all of the car and the picture of the car is not real, so the people looking to buy this car has to go on their memory on what the whole of the car looks like even though the cartoon resembles the actual car that is sold on the road. This advert is also split into two sections with the pictures. The Honda Civic advert is a real picture of the car, this is because it is a new range so people have not hade the chance to remember what the new car looks like, plus they are going on the new styling of the car. They also use this advert to show how good the car looks and how the car itself will beat off the other competition of the all the Gti ranges. The angle of which the photo of the Civic is taken shows off the cars stylish looks and the all of the sporty aspect of the car. The caption at the bottom of the advert it shows all of the new aspect of the sports side of the car like the: Race-tuned suspension, 6 Speed Gear box and the price of the car which is less than �16000 which is quite cheap for a sports car like this one. ...read more.