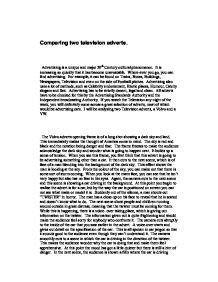 Comparing two television adverts. Advertising is a unique and major 20th Century cultural phenomenon. It is increasing so quickly that it has become unavoidable. Where-ever you go, you can find advertising. For example, it can be found on Trains, Buses, Buildings, Newspapers, Television and even on the side of Football pitches. Advertising also uses a lot of methods, such as Celebrity endorsement, Exotic places, Humour, Catchy slogans and Sex. Advertising has to be strictly decent, legal and clean. All adverts have to be checked for this by the Advertising Standards Authority and the Independent broadcasting Authority. If you watch the Television any night of the week, you will definitely come across a great selection of adverts, most of which would be advertising cars. I will be analysing two Television adverts, a Volvo and a VW. The Volvo adverts opening frame is of a long shot showing a dark sky and land. This immediately makes the thought of America come to mind. The sky is red and black and the notation being danger and fear. The frame freezes to make the audience acknowledge the dark sky and wonder what is going to happen next. It builds up a sense of tension. When you see this frame, you first think that this advert is going to be advertising something other than a car. It then cuts to the next scene, which is of face of a man blending into the background of the dark sky. ...read more.

This is what the scene is produced for, so that when the man does eventually drive to the eye of the storm, the audience will realise and acknowledge that this car is something different. The scene after that shows a close-up on the mans face. When you look deeply into the mans face you can see that he is very calm for this situation while everyone else is running around in horror and fear. This scene gives out the statement of the man having his full trust in the car. The camera switches to a weather station. Everything in and around the weather station is peaceful and calm. This is included in the middle of the advert to break up the tempo and change the setting from horror and fear to calm and peaceful. The advert continues with this in the next shot, which is of a flower. The flower is white and could have been placed in the middle of all the havoc and chaos of the storm as a symbol of hope. You see the eye of the storm in the next scene. The eye of the storm is the total opposite of the outside of the storm. In the eye it is relaxed and quiet and on the outside of the storm it is dangerous and frightening. In the eye of the storm you see a man, which must be the man you see driving the car. ...read more.

This means that the advert must have cost absolutely nothing to produce and that two years service on a new Volkswagen Golf costs nothing as well. The advert gives a free-phone number on a post-it note. This still all adds to the cheap and tacky theme and to show that it does the next frame says "that's free too." This advert is based on the cheap theme so that it can "take the Mickey" out of the adverts that spend millions of pounds producing. Both the adverts I analysed were about cars, but they were both incredibly different and deployed a different way of advertising. The Volvo advert is showing what the car can do and how good it is, whilst the V.W advert is comical and just says how cheap the car is to service. The Volvo advert shows a lot of special effects and a thrilling story line, which is used to help show how the handling of the car and its drive quality. The V.W advert is the total opposite of the Volvo, as it uses comedy and cheapness to get the audiences attention. This advert is basically produced to "take the Mickey" out of all the adverts that are flashy and cost millions to make as it can still get the message to the audience but with a lot less expense. In my opinion the V.W advert is the better of the two to sell cars as it stands out more from the normal advert. The Volvo advert is not very original as there is a lot of adverts which are very similar to it. ...read more.