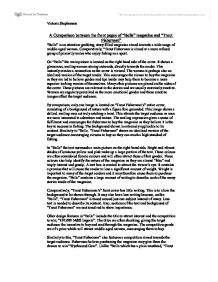 Comparison between the front pages of Bella magazine and Trout Fisherman

A Comparison between the front pages of "Bella" magazine and "Trout Fisherman" "Bella" is an attention-grabbing, story-filled magazine aimed towards a wide range of middle-aged women. Comparatively, "Trout Fisherman is aimed at a more refined group of primarily males who enjoy fishing as a sport. On "Bella" the main picture is located on the right hand side of the cover. It shows a glamorous, smiling woman staring outwards, directly towards the reader. This instantly creates a connection as the cover is viewed. The woman is perhaps also an idealized version of the target reader. This encourages the viewer to buy the magazine as they are led to believe guides and tips inside may help them to become a more superior-looking version of themselves. Many other pictures are placed on the sides of the cover. These pictures are relevant to the stories and are usually extremely emotive. Women are regularly perceived as the more emotional gender and these emotive images affect the target audience. ...read more.

This is to allow the background to be shown through. It may also have less writing because, unlike "Bella", "Trout Fisherman" is based around just one subject instead of many. Less text is needed to describe its content. Also, sections of the text and background of "Trout Fisherman" are sectioned red to show importance. Other design features in "Bella" include the title to attract interest and the competition to win, "�10,000 M&S lingerie". The titles are often shocking, giving the target audience the incentive to buy and read through the magazine. The competition goods are of a prize which will attract middle-aged women, encouraging them to buy. Similarly to this, "Trout Fisherman" also features a competition aimed towards the target audience. Fishermen believe purchasing the magazine may give them the chance to win "Wychwood Gear". Unlike "Bella which has a plain masthead, "Trout Fisherman" has a masthead featuring the scaled filling of a fish exterior. ...read more.

Throughout the cover, the writer has used specialist terms and phrases to show the knowledge of the subject, encouraging readers to buy as they believe they may be able to improve on their talent. Also, throughout the magazine cover, the writer uses phrases such as "vital", "exclusive" and "best-selling" to emphasize how essential the magazine is for those of the target audience. They believe that with this magazine they can improve drastically. Overall, "Bella" and "Trout Fisherman" differ significantly to suit their target audiences. They use language, design features and images extremely differently but their basic layout is fairly similar with the main image on the right and the majority of the text on the left. "Bella" often used emotive images and language to appeal to the emotional side of women while "Trout Fisherman" used active and militaristic pictures and phrases to attract the masculinity of men. Both magazines have successfully created a front cover which attracts the audience. ?? ?? ?? ?? Victoria Stephenson ...read more.

**** This is a very good essay which offers a detailed analysis of the two magazines with good textual evidence throughout. It could be improved by better structuring and more use of key terms.