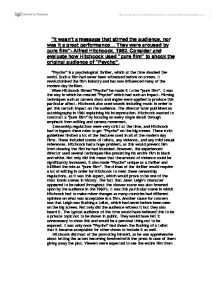 Consider and evaluate how Hitchcock used &quot;pure film&quot; to shock the original audience of &quot;Psycho&quot;

"It wasn't a message that stirred the audience, nor was it a great performance... They were aroused by pure film"- Alfred Hitchcock, 1962. Consider and evaluate how Hitchcock used "pure film" to shock the original audience of "Psycho". "Psycho" is a psychological thriller, which at the time shocked the world. Such a film had never been witnessed before on screen. It revolutionised the film industry and has now influenced many of the modern day thrillers. When Hitchcock filmed "Psycho" he made it to be "pure film". It was the way in which he created "Psycho" which had such an impact. Filming techniques such as camera shots and angles were applied to produce this particular affect. Hitchcock also used sounds including music in order to get this certain impact on the audience. The director later published an autobiography in 1961 explaining his interpretation. Hitchcock wanted to construct a "pure film" by focusing on every single detail through emphasis from editing and camera movement. Censorship regulations were very strict at the time, and Hitchcock had to bypass these rules to get "Psycho" on the big screen. These strict guidelines limited a lot of the features used in all of the modern day films. These included scenes of toilets, any violence, and any mild sexual references. Hitchcock had a huge problem, as this would prevent him from showing the film he had intended. ...read more.

This foreshadows later events and the fact that they all have shadows also enforces the sense of duality regarding Bates. All of these devices that Hitchcock has cleverly introduced into the scene such as camera shots and angles, mis-en-scene and position effectively displays the different personalities in the scene. The different meanings have been successfully layered through the various techniques. The audience identifies these by the several different views of the camera. The sounds also help to build up tension as any wrong moves are illustrated through sudden accents in the soft music which mimicking Bates as he plans his next savage murder. The Shower scene is said to be one of the most iconic pieces of work in the film industry. Containing fifty-four cuts in just two minutes, which are mainly extreme close-ups of the murder, many claim it is the most "frightening scenes in cinematic history". Hitchcock applies a combination of close shots and medium shots quickly in a short amount of time to make the audience believe the sequence longer. This also helps it appear more violent and subjective. One of the techniques that Hitchcock uses is the way he assembles the mis-en-scene and how the environment is presented. The juxtaposition of the dark parlour scene and the light bathroom scene shows the differences between Norman and Marion. ...read more.

Many other directors have also produced similar performances from The Simpsons Cape Feare and even a sequel of "Psycho". I personally do not believe that his psychological thriller had an amazing performance but I can definitely see why it has influenced so many other productions around the world. No one before had ever seen anything like "Psycho" in his or her life, which is why it had such an impact. He was able to make it an effective film because he was directing and producing at the same time. This meant he could use all his techniques to create "pure film" and overcome the censorship policies while promoting his movie just to have that extra shock when the audience saw it. I do believe that Hitchcock can be known as "the master of suspense". He has shown this through not only "Psycho", but also other famous psychological thrillers which he has directed for instance North by North West and Vertigo. He uses "layers of suspense" where different meanings are entwined to add tension and finally surprise the viewer, as they are stunned when finding out the truth. The audience of the time showed through their positive response that Hitchcock deserved this title. His status as a director and publisher went up and he was seen as one of the most effective film creators in the world. Hitchcock received a huge praise when he introduced such a startling film which nothing else could compete with. ?? ?? ?? ?? ...read more.