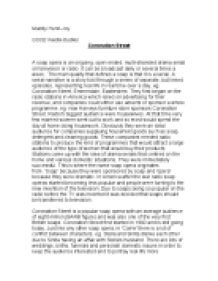 Coronation Street clearly fits the genre of a soap opera

﻿Maddy Henri-Joy GSCE media studies Coronation Street A soap opera is an ongoing, open ended, multi-stranded drama serial on television or radio. It can be broadcast daily or several times a week. The main quality that defines a soap is that it is a serial. A serial narrative is a story told through a series of separate, but linked episodes, representing real life in real time over a day, eg. Coronation Street, Emmerdale, Eastenders. They first began on the radio stations in America which relied on advertising for their revenue, and companies could either use adverts or sponsor a whole programme, eg now Harveys furniture store sponsors Coronation Street. Radio's biggest audience were housewives. At that time very few married women went out to work and so most would spend the day at home doing housework. Obviously they were an ideal audience for companies supplying household goods such as soap, detergent and cleaning goods. These companies needed radio stations to produce the kind of programmes that would attract a large audience of the type of women that would buy their products. Stations came up with the idea of drama serials that centred on the home and various domestic situations. ...read more.

the young couple (Chesney and Katie,) the bad boy (Ryan,) the fiesty woman (Tracey,) the powerful matriarch (Rita). Coronation Street is a lot like other soaps including Eastenders and Emmerdale. They are similar because they are all serials and they all show 24 hours in one episode. As Coronation Street and Emmerdale are on ITV they include advert breaks, which are timed in with the story lines, whereas Eastenders is on BBC and doesn't include adverts. All three soaps also show domestic issues that the aduience find interesting and can somehow relate to. Corrie, Eastenders and Emmerdale are all 30 minutes long and often have hour long specials at certain occasions such as Christmas and New Year or if a spectacular event is happening, eg. a shooting, robberies, falls, deaths, crashes and weddings. Staple storylines involve personal conflicts. Current examples at the time of writing are: Carla's story centres on fighting back from her recent problems and making a relationship with Peter work Sunita takes a chance on Karl as her marriage breaks down McDonalds' marriage also breaaks down as they fought for a child and then each other Kevin's affair broke up his marriage when he fathered baby Jack and now he's trying to move on Eileen and Paul have had a difficult time in their quest to be together. ...read more.

Because soaps are centred on domestic life and have dominant female characters, their audience attracts women who steretypically spend the household budget. Therefore advertisers and sponsors of household products and goods will pay well for publicity. The following quote is from www.itvmedia.co.uk/advertising-on-itv: 'The cost varies according to the target audience and reflects its amount of television viewing. Audience delivery is measured in television ratings (TVRs). Each spot therefore has a value depending on the size of the audience and the demographic, for example, a spot in Coronation Street, delivering 21 TVRs, is worth 10 times more than a slot in This Morning delivering 2.1 TVRs.' Coronation Street clearly fits the genre of a soap opera due to many factors such as: it is serial and carries on the story. Five episodes of Corrie are brodcasted each week, for 52 weeks of the year each with never ending storylines. We can see it is a soap by the target audience (women) and how the episodes cater for them, eg. issues shown, characters' pesonalities, events that occur and the time that the episodes are shown. It is intestersting and can also make viewers feel like part of a community or feel involved with a continuing story line when they watch. It encourages its viewers to to speculate what happens next by its dramatic storylines and cliff hangers. ...read more.