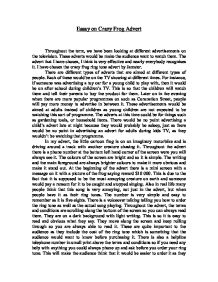 Throughout the term, we have been looking at different advertisements on the television. These adverts would be make the audience want to watch them. The advert that I have chosen, I think is very effective and nearly everybody recognises it. I have chosen the crazy frog ring tone advert by Jamster.

There are different types of adverts that are aimed at different types of people. Each of these would be on the TV showing at different times. For instance, if someone was advertising a toy car for a young child to play with, then it would be on after school during children’s TV. This is so that the children will watch them and tell their parents to buy the product for them. Later on in the evening when there are more popular programmes on such as Coronation Street, people will pay more money to advertise in between it. These advertisements would be aimed at adults instead of children as young children are not expected to be watching this sort of programme. The adverts at this time could be for things such as gardening tools, or household items. There would be no point advertising a child’s advert late at night because they would probably be asleep, just as there would be no point in advertising an advert for adults during kids TV, as they wouldn’t be watching that programme.

In my advert, the little cartoon frog is on an imaginary motorbike and is driving around a track with another creature chasing it. Throughout the advert there is a phone number at the bottom left hand corner of the screen were you will always see it. The colours of the screen are bright and so it is simple. The writing and the main foreground are always brighter colours to make it more obvious and make it stand out. At the beginning of the advert there is a mini screen with a message on it with a picture of the frog saying reward $10 000. This is due to the fact that it is supposed to be the most annoying creature on earth and someone would pay a ransom for it to be caught and stopped singing. Also in real life many people think that this song is very annoying, not just in the advert, but when people have it as their ring tones. The number is very simple and easy to remember as it is five eights. There is a voiceover talking telling you how to order the ring tone as well as the actual song playing. Throughout the advert, the terms and conditions are scrolling along the bottom of the screen so you can always read them. They are on a dark background with light writing. This is so it is easy to read and obvious what they say. They move along the screen and keep rolling through so you are always able to read it. These are quite important to the audience as they include the cost of the ring tone which is something that the audience would want to know before purchasing it. There is also a helpline telephone number in small print above the terms and conditions so if you need any help with anything you could always phone up and ask before you order your ring tone. This will make the audience think that it would be easier to order it as they will be able to call up at any time to report any problems or find out about anything in particular. This number isn’t that obvious as it is quite small and not that bright. This could be because the company wouldn’t really want many people calling up and causing hassle. Another thing that is on the screen is a picture of a CD and it says when it is due to be released. This is because the ring tone was such a success that producer decided to release a single. This single got to the number one top spot out of 40 different songs which proves that it is very popular.

When the camera has started looking at the main character, the frog, it pans right across the screen while the frog is riding his imaginary motorbike across the track. When he starts to go up the side of the building, the camera angle changes to tilt upwards and it also changes to a low angle shot, looking upwards. After that, the frog ends up just going round the track being chased by another creature. Here the camera changes to pan and tilt in the right direction. At certain points in the advert there are close ups of the frog when he is singing at certain points. At the end of the advert, the song quietens down, and the camera zooms in towards the frog when it is smiling. It then changes to a ‘big close up’. The last shot is of the frog at an ‘extreme close up’. This is just before the advert is about to end.

Throughout the advert, there is always non digetic sound. This is the ‘crazy frog’ song. This song is always playing in the background even when the voiceover is talking. As it is not too loud, we can still hear the voiceover clearly. It just gives the audience and idea of what the song is like. There is also digetic sound, which is from the female voice over. She talks louder than the music and tells us how to order your Jamster product. The voiceover gives all of the instructions clearly and tells you exactly how to order your product and how to make it easy to do. Having a contrast with both of these sounds adds effect because having both of them to makes it sound better and it helps you to understand more, as you have the song playing and someone talking.

All adverts mise en scene is important because the appearance adds to what you think overall about the advert and the company. If it wasn’t laid out very well and it was confusing then people wouldn’t think much of it. The way that it is set out is important, so if there are bright colours and it is easy to read it would be better than normal. Some people would see the advert and on first impressions not want to watch the rest of it because it was black or boring or on those lines. This wouldn’t be successful as people would change the channel before they had even finished watching it and not realise what it was about. This is one way that would loose potential customers and not end up selling anything. This advert is set up quite well, because the foreground is bright colours so it looks good and there is nowhere that you can’t read because of the wrong colour scheme.

In conclusion I think that this advert is quite successful as it came to my attention, and they are trying to sell it to children my age. This means that they have achieved their purpose and caught the audience’s attention. I would say that this advert is aimed at teenagers as they would be the ones with mobile phones that want to have the latest ring tones, rather than young children who don’t usually have phones, and adults don’t really worry about what ring tones they have. The Jamster Company also has other ring tones that are for sale with other characters, such as a teddy bear. These are basically the same as the frog ones, but a different tune. People recognise them as well but they haven’t caught on as much as the crazy frog one yet. They may become more popular as more people find out about them. As people think that the crazy frog ring tone was a success they might want to buy a different product from that company as they know what it’s about and would think that it is good. Overall I thought that was a good advert and many people watched it whatever time it was on and whoever they were.