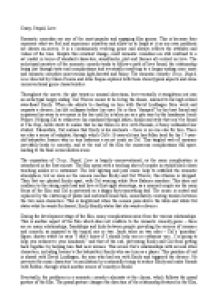 ﻿Crazy, Stupid, Love Romantic comedies are one of the most popular and engaging film genres. This is because they represent what we feel and experience ourselves and allow us to laugh at it as our own problems are shown on-screen. It is a continuously evolving genre and always reflects the attitudes and values of the time. Despite this constant change, most romantic comedies are still confined to a set model in terms of standard characters, soundtracks, plot and themes all centred on love. The archetypal narrative of the romantic comedy tends to follow a path of love found, the relationship being put through tests and complications and eventually resolving to a happy ending once more and romantic comedies must remain light-hearted and funny. The romantic comedy Crazy, Stupid, Love directed by Glenn Ficarra and John Requa explores both these stereotypical aspects and some unconventional genre characteristics. Throughout the movie, the plot twists in unusual directions, but eventually it straightens out into an archetypal happy ending. Cal Weaver seems to be living the dream, married to his high school sweetheart Emily. ...read more.

This is heightened when the camera pans above the table and while Cal states what he wants for dessert, Emily blankly states that she wants a divorce. During the development stage of the film, many complications arise from the various relationships. This is another aspect of the film which does not conform to the romantic comedy genre ? there are so many relationships, friendships and links between people providing the sources of romance and comedy, as opposed to the typical one or two. Jacob takes on two roles ? Cal?s ?guardian? figure, shown where he says ?I don?t know if I should help you or euthanize you?I?m going to help you rediscover your manhood,? and that of the cad, preventing Emily and Cal from getting back together by helping him find new women. This severs Cal?s relationships with several other characters, including Jessica?s (the babysitter) family who see him as a player. This position of cad is shared with David Lindhagen, the man who had sex with Emily and triggered the divorce. He prevents the main characters? reconciliation by continually trying to seduce Emily and make friends with Robbie, through which another source of comedy is found. ...read more.

Cal understands that he was too harsh on Jacob and Hannah and allows them to be together, mending several relationships in the film. Robbie and Jessica are also moved by Cal?s speech, Jessica gives Robbie her photos to get him through high school and they also fully reconcile. The many relationships in the film satisfy the modern audience?s need for diversity, and they widen the audience able to relate to the film. The movie ends happily, with the main couple ? Emily and Cal ? staying together. The romantic comedies have always been popular because they are continuously evolving and reflect the attitudes and values of the time and people. Throughout Crazy, Stupid, Love, although the plot turns away from the archetypal characteristics of this genre, it also conforms in some ways. The exposition is largely atypical, and throughout the film both conventional and unconventional problems amongst the characters are introduced. There are many grand gestures because there are several relationships in the film, another uncharacteristic aspect of the film. Crazy, Stupid, Love finishes on a light-hearted note, with the somewhat stereotypical reconciliation sequence bringing the film to an appealing close. ...read more.