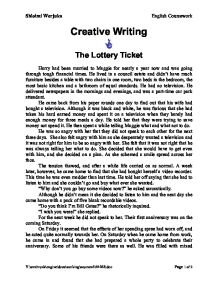 Creative Writing The Lottery Ticket Harry had been married to Maggie for nearly a year now and was going through tough financial times. He lived in a council estate and didn't have much furniture besides a table with two chairs in one room, two beds in the bedroom, the most basic kitchen and a bathroom of equal standards. He had no television. He delivered newspapers in the mornings and evenings, and was a part-time car park attendant. He came back from his paper rounds one day to find out that his wife had bought a television. Although it was black and white, he was furious that she had taken his hard earned money and spent it on a television when they barely had enough money for three meals a day. He told her that they were trying to save money not spend it. He then spent a while telling Maggie what and what not to do. ...read more.

Some of his friends were there as well. He was filled with mixed emotions. On the one hand how could he reject a party like this, and on the other hand, how could she go and spend more of his hard earned money. He decided to enjoy the party without complaining. One of his presents was a lottery ticket. He picked it up and saw the numbers; six, twenty-three, twenty-seven, thirty-two and forty one. If he won he would be able to move out of their old council flat and into a mansion - he dreamt. He thought for a while what he could do with the money if he had won. He memorized these numbers as they meant a lot to him. The evening carried on as more of his friends came. At eight o'clock they decided to watch the draw on their television. He sat impatiently waiting for them to call the numbers, and soon they came. ...read more.

When he was asked for the quantity he replied "six." He woke up in the morning and read the newspaper. His face went pale when he saw that the numbers were totally different to the numbers on his ticket that was currently under his pillow. He asked his wife what had happened and she told him that she had recorded last weeks draw and bought a ticket for this week with last weeks winning numbers. And last night he had watched the video. He sat down with all the blood drained from his head. He was slowly realizing that he had made a fool of himself and that he was still as poor as he was. He asked his wife why she did it, and she explained to him that she felt that he was treating her a bit too harshly. He had learned his lesson. The next day Harry woke up and saw six BMWs outside his council estate. Shloimi Werjuka English Coursework C:\My Documents\My Courseworks\English\Creative Writing1.doc Page 1 of 2 ...read more.