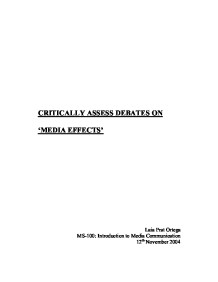 CRITICALLY ASSESS DEBATES ON 'MEDIA EFFECTS' Laia Prat Ortega MS-100: Introduction to Media Communication 12th November 2004 CRITICALLY ASSESS DEBATES ON 'MEDIA EFFECTS' A long history lies behind question about how communication affects or influences people. Greeks developed sophisticated hypothesis about how to impress listeners through the spoken word and Aristotle was concerned with theorizing the art of speaking. Even nowadays in face-to-face conversations each of us mobilizes theories about how to influence our listeners. For instance, we wish to make others understand how we feel or what we think. Today, mass communication studies have developed as a discipline with a focus on television and newspapers and, to a lesser extent, cinema and radio. Thanks to mass communication technologies a programme can now be viewed globally, so that questions about effects have thus become more complex. The origin of modern media studies is usually located in 1930s Germany associated with work by scholars such as Adorno, Marcuse and Horkheimer. Their theories were developed in response to Germany's descent into fascism. This work, collectively known as 'The Frankfurt School', theorized that social disintegration left people vulnerable to propaganda. This School promoted a 'hypodermic model' of media effects whereby messages were directly absorbed into the minds of the people. Many other theories and approaches to the media have developed since then; but nowadays, as we will see, this model is discredited. More recently studies have revealed the diverse ways in which different people may respond to the same programme. ...read more.

They called their theory social learning theory (Grossberg, 1998). However, by the early 1960s, social psychologist Albert Bandura offered a revised social learning theory and argued that actors in the mass media are so attractive that audience members want to be like the media actors. Therefore, media characters or models can influence the behaviour of audience members simply by existing. Bandura believed that the best way to teach new behaviours, particularly to children, is to present the behaviour you want the child to learn, and the child will imitate that behaviour. We are now at the heart of the 'effects' tradition: the figure of the 'child' (innocent, vulnerable, corruptible...). In a series of early controlled laboratory experimental studies called Bobo doll studies, Bandura demonstrated that children can learn new behaviours by observation. He wanted to study two different effects: first, whether observing a filmed behaviour could teach children that behaviour, and second, if such observation motivated the children to be like the film model (Grossberg, 1998). He showed nursery school children a film of a person hitting a Bobo doll, an inflated plastic clown doll with a sand base, which rocked back and forth when punched. So, after each viewing condition, the children were taken into a room with various toys, including a Bobo doll like the one of the film. Bandura argued that this set of toys allowed the children to either imitate the aggression on the film or engage in various no imitative play behaviours. ...read more.

that 'direct effects of media upon behaviour have not been clearly identified, then we should conclude that they are simply not there to be found'. It is true that media effects are not identified, however they are there. They are elements which rely on our behaviour. Acknowledging that audiences can be 'active' does not mean that the media are ineffectual. The only thing we can be sure of 'The Frankfurt School' is nowadays discredited because if there is any clear issue it is that people do not absorb messages directly into their minds. The second conclusion that Gauntlett (1998:120) draws attention after 60 years of research is more optimistic and, in my opinion, more appropriated: 'Media effects research has quite consistently taken the wrong approach to the mass media, its audiences, and society in general'. Future researchers should explore how media operate with the development of new communication technologies. They need to change into a new paradigm, a new way of looking at the media without forgetting the technological transformation. Finally I would like to highlight an interesting reflection. As I have already said, the effects of the fictional depictions and the news are the same, although it is not considered like that by some researchers. Therefore, if we condemn some reality representations we are rejecting to know what happens in the world, as Martin Bell says 'we refuse to show the world as it is (...) You are seeing it all the time-in fiction, in the cop series, in movies. It's just the real world is not allowed to be seen like that'. ...read more.