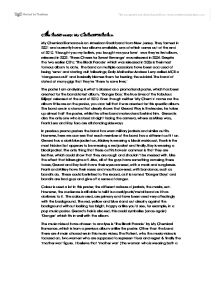 Cross media essay: My Chemical Romance. My Chemical Romance is an American Rock band from New Jersey. They formed in 2001 and currently have four albums available, one of which came out at the end of 2010. 'I bought you my bullets, you bought me your love' was they're first album, released in 2002. 'Three Cheers for Sweet Revenge' was released in 2004. Despite the two earlier CD's; 'The Black Parade' which was released in 2006 is their most famous album to date. The band on multiple occasions have been accused of being 'emo' and starting cult followings; Daily Mail writer Andrew Levy called MCR a 'dangerous cult' and basically blames them for herding the suicidal. The band of stated at many gigs that they're 'there to save lives.' The poster I am analysing is what's classed as a promotional poster, which has been created for the bands latest album, 'Danger Day: The True Lives of the Fabulous Killjoys' released at the end of 2010. Even though neither 'My Chem's' name nor the album tittle are on the poster, you can tell that it was created for this specific album. ...read more.

These could be linked to the record, as it is named 'Danger Days' and bandits are bad guys and give off a sense of danger. Colour is used a lot in this poster; the different coloured jackets, the masks, ect. However, the audience is still able to tell it is a rock/punk/metal band as it has darkness to it. The colours used, are primary and have been used very affectingly with the background. The red, yellow and blue stand out clearly against the background without looking too bright, happy or like you'd see, for example, in a pop music poster. Gerard's hair is also red, this could symbolise (once again) 'Danger' which fits in well with the album. The music video I have chosen to analyse is 'The Black Parade' by My Chemical Romance, which is from a previous album unlike the poster. Other than the band there are 4 main characters in this music video; The Patient, who the music video is focused on, Two women who are supposed to represent fear and regret & finally the 'mother war' figure. ...read more.

to see a marching band.' The parade is followed by figures in gas masks and other outfits signifying death. On the parade is the band, performing, as they move along the path of destruction. The black and white military suits they are wearing fit in well with the wartime appearance of the video. This look continues throughout the album, as a dark, deathly appearance. Both the poster and the music video are from two separate albums and we can see the band develop and change over the two years. 'The Black Parade' album was labelled as punk and emo, which has been portrayed in their military costumes. The dark and rock inspired phase of MCR's career was soon changed by the next album. 'Danger days' has a much softer, pop sound to it. This has been shown once again in the image change of the band, with the brighter colours and more casual look. However, the thing that doesn't change in either of the texts is how unique My Chemical Romance is, both 'The Black Parade' and 'Danger Days' the content is extremely original. ...read more.