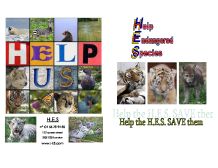 H.E.S is an association wich helps endangered species by creating Wildlife Preserve Parks with the donations you can do. (For more information see our website.) Did you know that 100 MILLION wild animals are killed by hunting in a year! This is why there are lots of endangered species. There are more than 1,000 animal species endangered worldwide. ...read more.

98 percent of the harp seals killed were pups under just three months of age. During the 2006 hunt, the Canadian government allowed fishermen to club and shoot at least 354,344 seals. The last time seals were killed at this rate in the 1950s and '60s the harp seal population was reduced by nearly two thirds. So many wolves have been killed that it is impossible to keep count. Most of them are killed illegally for their fur. ...read more.

They have discovered that 30 species could be extinct if you remove one plant. If YOU want to STOP this: * firstly stop damaging their habitats, * secondly like everybody else who reads this send a letter for the government for immediate action on preserve parks, more investigations to find poachers. * thirdly send a donation to us for credit cards connect yourself to our website. In the last 500 years WE, humans, have forced 820 species to extinction. ?? ?? ?? ?? ...read more.