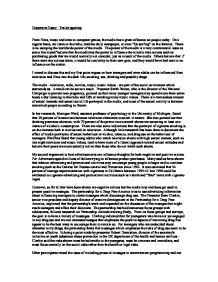 Discursive Essay - Trailer spotting From films, music and even to computer games, the media has a great influence on people today. On a regular basis, we listen to the radio, read the daily newspaper, or even "Go surfing" on the Internet. There is no escaping the worldwide power of the media. The power of the media is a very contreversial issue as some like myself believe that the media has the power to influence the mind to take actions such as purchasing goods that we would normally not consider, just as a result of the media. Others believe that if there were any actions taken, it would be comletley to their own gain, and they would have had next to no influence on the matter. I intend to discuss this and my first point argues on how teenagers and even adults can be influenced from television and films into the dark life; smoking, sex, drinking and possibly drugs. The media - television, radio, movies, music, music videos - are part of the social enviroment which surrounds us. A trend can be set as a result. Presenter Sarah Brown, who is the director of the National Campaign to prevent teen pregnancy, pointed ou that many younger teenagers may spend more thatn seven hours a day listening to the radio and Cd's or watching many music vidoes. ...read more.

The partnership has held numerous focus gruops with adolescents, follows reasearch on Partnership Attitude tracking Study, From its focus gruops and surveys, the goal is to have a variety of messages. Clarking indicated that for youngeters who have not yet engaged in any drug use and are not interested nessges that emphasise the positive aspects of remaining drug free appear to be the best wasy to encourage them to remain so. For teenagers who are undecided about wheteher to try drugs, the partnership thnks that messages which emphasise the risks of drug use seem to be the most effective. Echoing a point made by presenter Robert Dennistion, director of the secretary's initiative on youth substance abuse prevention in the UK department of the health and human services - Clarkin said the risks shown must be believable to the youngstes, must be concrete and immediate, and must focus centrally on the social risks rather than the health or legal risks. Other participants raised the issue of including prosocial messges in entertainment programming and not just in public service announcements. One participent pointed to a story line on the TV programme Beverley Hills 90210 several years ago that portrayed a character using good decision making techniques on deciding whter or not to become sexually active. ...read more.

While not under direct government control, it onften influences the public's view on issues prevalent at the time. With the invention of television and computers, books and newspapers are being swpet away by a wave of new technology with its wider capabilities. In THE SEIGE, this is thrown back in the viewers face. Proving the fact that media, not laws, rules our society. The terrorists wait for media coveragem any type of camera to strike. Then when they recieve recognition, they wreck havoc. The government uses the military in such the same way. In all the scenes with televisions showing the millitary, Bruce Willis, or someone similar comes on a screen and makes a patriotic speech. In one press conference where he was first implementing martial law, he says he wants to find the terrorists, destroy them, and be home in time for the playoff's. Using football, he has reached a large majority of the population. Towards the future, faster and more powerful influences will have been introduced and reached the world. The extent of their power on the population will be uncertain, but one thing for certain is that more people will be conned, eventually forced into the media. If you look up the defenition of main sources of power they can include * Superior resources * Superior numbers * Superior organisation. Now think of all the television broadcast companies. Think they can change your mind ? ...read more.