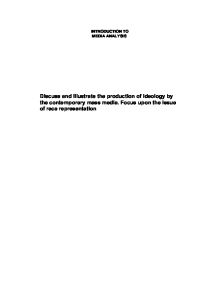 Discuss and illustrate the production of ideology by the contemporary mass media. Focus upon the issue of race representation

INTRODUCTION TO MEDIA ANALYSIS Discuss and illustrate the production of ideology by the contemporary mass media. Focus upon the issue of race representation The following paper will consider issues relating to representation of Black and Asian people in British film, television and music in contemporary society. Through historical context, imperial culture will be examined to show the foundations of dominant white ideology that treated colonial immigrants as inferior and external. Representation of race in this respect in mass media has endorsed and encouraged the superiority of white Englishness as a natural state. However the essay will conclude that through processes of globalisation, increased consumerism and the development of new cross cultural activities, a new form of cultural identity is emerging to challenge traditional national identity and the production of ideology. The concept of ideology represents collective ideas which are held to be true and which come to dominate all others. Through constant reinforcement, a belief system is generated which consolidates a particular view of the world. This formulation of ideology can be applied to the imperialist as they embarked upon the colonisation of continents such as Africa in the 19th century. Young (1996) states that "Ideologically, nineteenth century British colonialism was justified as a moral duty, a benevolent effort to spread Christianity and civilisation across the continent of Africa, Asia and America" (p56). ...read more.

One of the most legendary figures of the period was Alf Garnet, the main character in the comedy 'Till Death Do Us Part'. Daniels and Gerson (1989) describe his impact: "He has access to an enormous vocabulary of abuse that is all the more striking because it had been hitherto absent from British television screens. A whole repertoire of anxieties and prejudices was being expressed for the first time and with such bravado and forcefulness that the response was instant and massive" The tirade of stereotypes and anxieties expressed by the programme reflected much of the political and social rhetoric of the time, marked by the famous speech made by Enoch Powell warning against the dangers of immigration. By the late 60's the great economic boom was coming to an end and anxieties about an ailing economy were reflected in the media. In subsequent years a succession of entertainment programmes would highlight racial stereotyping as a central theme. This included Love Thy Neighbour where a black couple moves into a suburban street and weekly jousting between the black husband and his neighbour would take place. The comedy series Mind Your Language was able to charachature any race or characteristic from across the world as it was set in an evening class where English was being taught. ...read more.

This is supported by Gillespie (1995) "The increasing globalisation of economic, political and cultural relations is matched by a massive rise in the flow of images, narratives and information which cut across and challenge established national and cultural boundaries and identities" (p3) The effects of global communications have been combined with the domestic responses of people to increasing economic and racial tension in Britain. In addition to the gains made through formal bodies struggling toward the recognition of endemic racism, The late seventies saw the rise of the Punk Rock era, which incorporated Reggae and dub music along with the Rock Against Racism campaign. This was the first time that Black protest music was fully accepted into the mainstream. In the early eighties there was major rioting in many cities across England. Racial issues in mass media moved from light entertainment to central news and a more complex discourse. Although race became more prominent in society, the producers were still white. Cashmore & Troyna (1990) state that "The Media have done little more than generate the material on which colonial mentality is sustained and the signs are that they will effect no radical change in the near future" (p201). The increased struggle toward acceptance of multicultural Britain was reflected in programming and film of the period. ...read more.