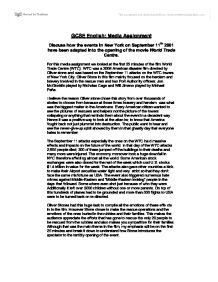 Discuss how the events in New York on September 11th 2001 have been adapted into the opening of the movie World Trade Centre.

GCSE English: Media Assignment Discuss how the events in New York on September 11th 2001 have been adapted into the opening of the movie World Trade Centre. For this media assignment we looked at the first 25 minutes of the film World Trade Centre (WTC). WTC was a 2006 American disaster film directed by Oliver stone and was based on the September 11 attacks on the WTC towers of New York City. Oliver Stone in this film mainly focused on the heroism and bravery involved in the rescue men and two Port Authority officers; Jon McGlocklin played by Nicholas Cage and Will Jimeno played by Michael Pe�a. I believe the reason Oliver stone chose this story from over thousands of stories to choose from because at those times bravery and heroism was what was the biggest matter to the Americans. Every American citizen wanted to see the pictures of rescuers and helpers not the picture of the towers collapsing or anything that reminds them about the event in a decadent way. Hence it was a positive way to look at the attacks; to know that America fought back not just plummet into destruction. The public want to hear and see the never-give-up spirit showed by them in that ghastly day that everyone hates to remember. The September 11 attacks especially the ones on the WTC had massive effects and impacts on the future of the world. In that day of the WTC attacks 2,605 people died; 200 of these jumped off the buildings to their deaths and many more were injured. The economy moreover took a huge downfall in NYC therefore affecting almost all the world. ...read more.

Soon we see all the characters in the screen look up and out of the blue a shadow of dangerously low flying plane flashes past the screen. Close up camera shots were then used to show the clear expressions shown by the characters in response to the unusual sight. Nevertheless you don't see the plane flying in to the tower. This could have been because of ethical or technical reasons. Additionally a sombre non-diagetic music was being played as the plane when the people where looking at it. This signified the sadness and disappointment that flooded through every one the point that plane flew in to the tower. Moreover we were shown a police station near the towers shaking as the plane came into contact with the tower. This suggests that these attacks rocked everybody emotionally and physically even the police. The director chose pictures of the dilapidated tower on TV when some officers were watching it while trying to make any sense of it. Stone, I believe chose to show a clip of genuine pictures shown news that day so that someone can say "Oh! I remember watching that" and trigger memories that were put aside. Another thing I picked up on was that the officers were from a number of races. This might signifies the community of New York and its cultural diversity. However, I take it as it was meant to signify the 2,605 people that died on the WTC attacks were from 90 different cultural backgrounds, so it mirrors the officers in that station. The officers were then called to go near the towers on a bus so that they can get one with the rescue operations. ...read more.

They all gave the impression that they were calm which was the least thing you would expect to see on people's faces at that time. You would certainly expect them to be very panicky and hectic as well. Furthermore one thing I really liked about the opening was that I think Stone captured the real spirit of America by choosing to focus on the heroism. Even though there was real danger out there they still refused to admit defeat, sit down and sob about it. It was the contrary, the stuck together and fought against it. By including the sounds of sirens and walkie talkies Stone showed that USA never gave up, they showed the will to fight. Nevertheless some people think otherwise. They believe it's the lack of political bite that was one of World Trade Center's weakest elements. Therefore this made it seem heavily biased towards the entire "Heroism" theme and an overly sentimental, sluggish bore. They felt he needed to show us the real deal. Oliver Stone did a good job on these first 25 minutes but the rest of the film needed a bit more work. I thought these 25 minutes were the most enjoyable and gripping part of the film but the rest was a bit dry. However what the film does convey effectively was the sheer confusion in the period following the first plane hitting. As McGlocklin and his men enter the World Trade Center to help in the evacuation, they aren't even aware the second tower has been struck. After the film's most unsettling moments as it shows the tower collapsing all around, McGlocklin and Jimeno find themselves trapped under an avalanche of rubble. Therefore all credit to Stone and all the characters. ?? ?? ?? ?? Evan Araia 5 ...read more.