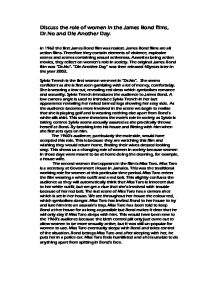 Discuss the role of women in the James Bond films

Discuss the role of women in the James Bond films, Dr.No and Die Another Day. In 1962 the first James Bond film was realest. James Bond films are all action films. Therefore they contain elements of violence, explosive scenes and scenes containing sexual activeness. Aswell as being action movies, they reflect on women's role in society. The original James Bond film was "Dr.No". "Die Another Day" was then released 40years later in the year 2002. Sylvia Trench is the first woman we meet in "Dr.No". She seems confident as she is first seen gambling with a lot of money, comfortably. She is wearing a low cut, revealing red dress which symbolises romance and sexuality. Sylvia Trench introduces the audience to James Bond. A low camera angle is used to introduce Sylvia Trench in her last appearance revealing her naked tanned legs showing her sexy side. As the audience becomes more involved in the scene we begin to realise that she is playing golf and is wearing nothing else apart from Bond's white silk shirt. This scene threatens the male's role in society as Sylvia is taking control. Sylvia seems sexually assured as she practically throws herself at Bond. By breaking into his house and flirting with him when she first sets eyes on him. ...read more.

Bond and Honey Ryder work as a team to help each other out of trouble. In my opinion, I think that this relationship between Bond and Honey Ryder would have threatened the male society and changed the women's role in society because Bond treats Honey Ryder as an equal. Also, Honey Ryder mentioned that she used a female black widow spider to kill a man. This implies that females are stronger than males. The 1960s audience would have found this scene interesting. This is because of Honeys entry to the film. She arose from the water wearing just a bikini, revealing more skin than the audience would have imagined. The aggressiveness that Honey Ryder shows would be un-expected as this was not the average personality women used to show. Being in control would normally be the male's role, but Honey Ryder proves to us that women are able to do the job just as well. This would have changed the role in women's society because it shows that women are just as good as men doing the same activity. In the early sixties the women's role in society was changing dramatically. This is because women were becoming more sexually active to people who were un-married as the pill was becoming more popular. ...read more.

Bond's relationship with M is like a father and son relationship. Bond respects M. I believe that Flemming, the author, made the character Bond look up to M so much because Flemming lost his dad at a very young age and was bought up by his mother who he refers to M. From the original film in 1962 to the film released in 2002, M's role has changed from being male to female. This shows us that women's role in society has become stronger. The roles that women had in the 1960s are completely different to the ones they have today, Women always used to have simple jobs such as being a house wife, and had part time jobs like a secretary. Women didn't sleep around; this is partly linked to the fact that there were not many contraceptives available. Women can now have any job they want. We have even had a Female Prime Minister Margret Thatcher. This is reflected in the James Bond films with M. In "Dr No" M was male although there was a dramatic change in this character when she was reviled to be female in "Die another Day". Women are now seen to be equal with men, they have been able to develop the same skills, abilities, and have the same jobs. Women are no longer thought to be any less capable. ?? ?? ?? ?? ...read more.