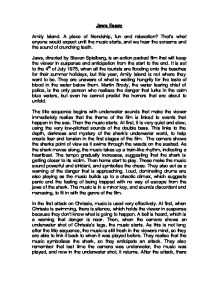 Jaws Essay Amity Island. A place of friendship, fun and relaxation? That's what anyone would expect until the music starts, and we hear the screams and the sound of crunching teeth. Jaws, directed by Steven Spielberg, is an action packed film that will keep the viewer in suspense and anticipation from the start to the end. It is set to the 4th of July 1975, when all the tourists are flooding onto the beaches for their summer holidays, but this year, Amity Island is not where they want to be. They are unaware of what is waiting hungrily for the taste of blood in the water below them. Martin Brody, the water fearing chief of police, is the only person who realises the danger that lurks in the calm blue waters, but even he cannot predict the horrors that are about to unfold. The title sequence begins with underwater sounds that make the viewer immediately realise that the theme of the film is linked to events that happen in the sea. Then the music starts. At first, it is very quiet and slow, using the very low-pitched sounds of the double bass. This links to the depth, darkness and mystery of the shark's underwater world, to help create fear and tension in the first stages of the film. The camera shows the sharks point of view as it swims through the weeds on the seabed. ...read more.

As the dog runs into the water, we also see Alex run into the water. This shows that they are linked, as they both suffer the same fate. We see a man in a black swimming hat swimming underwater. The top of his hat represents a shark fin, and tension is suddenly added. Then we see the man's head come out of the water, and humour is added as well as relief. We also see a woman scream as she is raised out of the water, but then we see this is another false alarm. We later see that the third alarm is for real. The camera shows the dog's stick floating in the water and the viewer wonders what has happened to the dog, and anticipates the worst. After Alex is attacked, there is panic among the people on the beach, which reflects the viewer's feelings. We then see Alex's lilo washed up on the beach. This shows the damage that the shark has done to the lilo, and leaves the viewer to imagine what it has done to Alex. Colour is used effectively in this scene, because both Alex's shorts and the dog's collar are red, symbolising danger and blood. Also, the colour yellow is used because the dog's owner and Alex's mother are wearing yellow, and Alex's lilo is also yellow. Also, some of the tourists arriving on the Island are wearing yellow, which identifies them as potential victims. ...read more.

When Quint finds the head and the shark tooth under the boat, it shocks the viewer and adds suspense; they are afraid that Quint will be attacked before he returns to the surface. When Hooper is attacked in the cage and manages to escape, we do not see if he survives or not until right at the end of the film. After Quint is eaten alive, the viewer realises that if Hooper does not come to the surface, Brody is the only person left to tackle the shark on his own. He is stranded on the mast of the sunken ship, which relates to the first attack when Chrissie attempts to climb onto the buoy, so the viewer doesn't know if he will be any luckier than Chrissie. He is the least likely to succeed because of his fear of water, so when he finally kills the shark, humour is mixed with the relief, and all the tension is taken off because we know the danger has gone. I think that the scariest moment in the film is when the shark is attacking the cage that Hooper is in, especially when it comes up from behind because it is a shock to the viewer, and it happens when they are least expecting it. It is also a close-up shot of the shark's mouth, which makes it scarier, because it is showing it from Hooper's point of view, so that the viewer knows how scared he must be. ...read more.