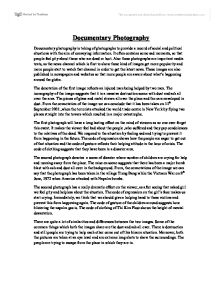 Documentary Photography Documentary photography is taking of photographs to provide a record of social and political situations with the aim of conveying information. It often contains some sad moments, so that people feel pity about those who are dead or hurt. Also these photographs are important media texts, as the news channel which is first to show these kind of images get more popularity and more people start to watch that channel in order to get the latest news. These images are also published in newspapers and websites so that more people are aware about what's happening around the globe. The denotation of the first image reflects an injured man being helped by two men. ...read more.

We respond to the situation by feeling sad and trying to prevent it from happening in the future. The code of expression shows how the people are eager to get out of that situation and the code of gesture reflects their helping attitude in the hour of crisis. The code of clothing suggests that they have been in a disaster area. The second photograph denotes a scene of disaster where number of children are crying for help and running away from the place. The mise en scene suggests that there has been a major bomb blast with ash and dust all over in the background. ...read more.

There is destruction and still people are trying to help each other come out of this bizarre situation. Moreover, both the pictures are taken at an eye level and are extreme long shots to show the surroundings. The people are trying to escape from the place in which they are in. Some of the differences are that in the second picture there are armed forces to help the people out, whereas in the first image it is just the common people who are helping each other. Both the pictures are taken at different occasion and places. Both the images makes you feel cry and it seems like people are begging us to help them. Moreover, it convinces us to to prevent the monster of terrorism to engulf the entire world. ...read more.