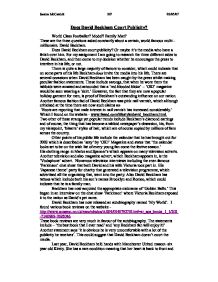 Does David Beckham Court Publicity? World Class Footballer? Model? Family Man? These are the three questions asked constantly about a certain, world famous multi -millionaire. David Beckham. Does David Beckham court publicity? Or maybe it's the media who have a fetish over him. For my assignment I am going to research the three different sides to David Beckham, and then come to my decision whether he encourages the press to interfere in his life, or not. There is quite a large majority of factors to consider, which could indicate that on some parts of his life Beckham does invite the media into his life. There are several occasions when David Beckham has been caught by the press whilst making peculiar fashion statements. These include sarongs, that when he wore them the tabloids were amazed and astounded that a 'red-blooded bloke' - 'OK!' magazine would be seen wearing a 'skirt.' However, the fact that they are now a popular holiday garment for men, is proof of Beckham's outstanding influence on our nation. Another famous fashion fad of David Beckham was pink nail varnish, which although criticised at the time there are now such claims as- 'Boots are reporting that male interest in nail varnish has increased considerably.' ...read more.

Perhaps it's his ex-Spice Girl wife formally known as Victoria Adams or Posh Spice, who pressurises him into dressing and acting a certain way. As, I'm sure that a lot of people who don't follow football will tell you, before Victoria entered his life, a large majority of these non-followers of football would not have been able to tell you much about David Beckham. However, as 'Hello' magazine states 'David's ex landlady says he has always been a style star and Victoria has only improved him a bit.' Perhaps Beckham is 'toying with the media that he knows he will lap up' as the website www.fazed.com/lifestyle/david_beckham.html that is devoted to 'Becks' suggests. David Beckham's family life is put through constant scrutiny from the tabloid newspapers. However, this is one part of his life that he would prefer to keep to himself. He has two sons, Brooklyn who was born on March 4th 1999 and Romeo who was born recently, September 1st 2002. He has got both their names on his football boots, and also tattooed onto his back, this implies that he is a very proud father. Recently, there were revelations of an alleged plot to kidnap his wife and young son Brooklyn. After this horrific incident, photos were taken of Victoria Beckham looking extremely glum and cheerless. ...read more.

During the Champions League victory over Bayer Leverkusen, Beckham broke a rib, which means that he will be out of the Manchester United side for up to six weeks. This football related article only appears in the 'Mail on Sunday' newspaper which is classed by some as an 'up market tabloid.' This could indicate that the 'fashion' side to Beckham is more important to most tabloid magazines than the 'football' aspect of his life. So, does David Beckham court publicity? In my opinion, there have been several occasions when Beckham may have used the media for his own good. Such as the calendar he has brought out and his 'Japanese theme' party for charity. However, I think that after the alleged plot of kidnapping his wife and child, he would prefer to keep a low profile and keep his family secure than receive the attention of the media. The statement from his autobiography also proves that, although he enjoys his career as a footballer, he is uncomfortable with the media attention he gets. I think David Beckham will always be surrounded by media attention as this is what developed his high profile of a world famous footballer, and he will have to accept that this is the negative aspect of being a well-known celebrity. Jessica McCarrick 10P 02/05/07 ...read more.