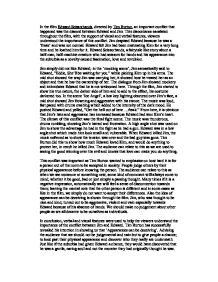 In the film Edward Scissorhands, directed by Tim Burton, an important conflict that happened was the discord between Edward and Jim. This discordance escalated throughout the film, with the support of visual and verbal features, viewers understood the importance of this conflict. Jim despised Edward because he was a 'freak' and was not normal. Edward felt Jim had been mistreating Kim for a very long time and he loathed him for it. Edward Scissorhands, a fairytale like story about a half-man, half-machine creature who had scissors for hands and his appearance into the suburbia as a novelty caused fascination, love and revulsion. Jim simply did not like Edward; in the 'mocking scene', Jim sarcastically said to Edward, "Eddie, She'll be waiting for you." ...read more.

The music was thunderous, drums rumbling, showing Jim's hatred and frustration. A high angle shot was used on Jim to show the advantage he had in the fight as he had a gun. Edward was in a low angle shot which made him look small and vulnerable. When Edward killed Jim, the music softened as to show the tension was over and the bad guy was gone. Tim Burton did this to show how much Edward loved Kim, and would do anything to protect her, in result he killed Jim. The audience can relate to this as we are used to seeing the good winning over the evil and knows that love can make you do anything. This conflict was important as Tim Burton wanted to emphasise on how hard it is for a person out of the norm to be accepted in society. ...read more.

We should make no judgement about other people as we all deserve to be ourselves as individuals. In conclusion, verbal and visual features were used to help the viewers understand the importance of the conflict between Jim and Edward. Tim Burton has successfully revealed his intention in showing us that 'Appearances can be deceiving'. Advising the audience that we should not be judgemental and vain but to give people a chance; to look past their physical appearance and discover who they really are underneath. Just like if the suburbia had given Edward a chance, they would have discovered that he was a gentle, caring soul and not the monster they had originally thought he was. Describe an important conflict between characters in the text. Explain how verbal and/or visual features were used to help you understand why this conflict was important. ...read more.

*** The essay tackles the VISUAL FEATURES part of the essay question very well, by giving specific examples of camera work in the film. However, it is rather thin on VERBAL FEATURES. Also, sometimes the essay is overly chatty and lacks key media and literary terms.