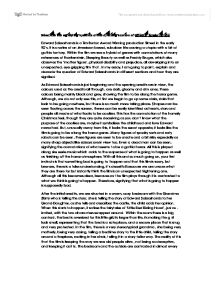 Describe the signifying systems of the opening scenes of Edward Scissorhands Edward Scissorhands is a Tim Burton Award Winning production filmed in the early 90's. It is a satire of an American based, suburban life causing a utopia with a bit of gothic fantasy. Within the film we see a hybrid of genres with connotations of many references of Frankenstein, Sleeping Beauty as well as Freddy Kruger, which also observes the 'mother figure', physical disability and prejudice, all developing into an unexpected, eye gripping film that . In my essay, I am going to point, explain and decode the question of Edward Scissorhands in different sections and how they are signified. As Edward Scissorhands is just beginning and the opening credits are in view, the colours used as the credits roll through, are dark, gloomy and dim ones, these colours being mainly black and grey, showing the film to be along the horror genre. Although, we do not only see this, at first we begin to go up some stairs, stairs that look to be going nowhere, but there is so much more taking place. Shapes can be seen floating across the screen, theses can be easily identified as hearts, stars and people all made of what looks to be cookies. ...read more.

It becomes dark, icy and isolated, totally different to the bedroom, it is very symbolic; the outside signifies an unhappy and dark feeling. Here again, showing that this film is trying to signify a horror gothic genre. Soon after we see the suburban town, the atmosphere is very tidy and perfect, the grass is green and neatly cut, the cars are shining, everything is decorated, nothing out of place and the houses are perfect pastel colours, and they match in a way that altogether the neighbourhood signifies a utopia. The 'perfect' place. However, on the other hand, the housewives make it is contrasted to what we believe the place is, trying to deceive the audience. The first housewife is a bit hard on peg, crude, curls in her hair and let's face it, a bit overweight. So really not so perfect like we expect her house is shown to be. The next housewife is impatient, not very kind, and only interested in herself, although she flirts quite a lot as she gets lonely making that the reason on why she does it. Really you expect her to be kind and everything you expect her to be of that what her home tells us. ...read more.

The way the music changes and the type of horror music playing gives you the feel that something bad is going to happen, but then she see's Edward and starts to act all motherly, but when Edward comes into the light, and you see him in his leather suit and scars all over his face her first instinct is to back away. She's scared of Edwards, she fears him, she gasps because of what she see's, she starts to walk back, and Edward walks towards her, Peg then automatically gestures him to stop, but Edward is calm, very child like, very innocent and Peg realises he is ok, she then changes back to the stereotype of a mother, she's caring once again, she asks sweet calm questions like ''are you alone''. Once Peg has asked all these questions, she doesn't even give Edward the chance to answer them, she takes control. She begins touching his face, tries to change him and mould him, trying to cover up the nasty scars until she decides to take him and look after him there and try and change him. She does all this because she knows he isn't harmful, he is just confused and a guiltless character. ...read more.