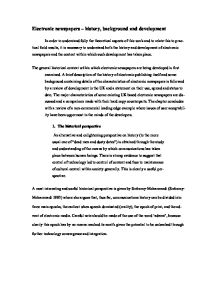 personal characteristics for credibility, and ability to invoke emotional responses in the recipients. Those who heard, as well as those who spoke were "empowered" - but were an elitist group and many neither heard nor spoke. The written and printed word Handwriting provided the first means of non-transient communication and came about for reasons such as the need to provide better and more objective record keeping. Whilst being limited in a spatial sense, the written word is not geographically constrained in the same way as during the orality epoch. However certain other characteristics are important. The sender and recipient need not be present together in either space or time. The context has no where near the same significance as it did earlier and the sender has much less control over the way in which the recipients interpret the message. Clearly there is usually little or no feedback. Paper and the printing press were the keys to the widespread use of the written word. ...read more.

Almost more powerful than the owners of the print media are the often monopolistic controllers of broadcast media who wield massive power over what is and what is not broadcast. Thus the gatekeepers continue to influence greatly the attitudes of the general public through the control over what and how news is received. Feedback is mere noise in the overall scheme of things and is indeed itself controlled by the same gatekeepers. 3. Summary The table below summarises the major characteristics of the three epochs described above. Epoch Geography / Sphere of influence Delivery of message Relation-ships Feedback Control Orality Local Real time One to one; one to many Real time; difficult to suppress Little Written / Printed word Constrained by language Non-real time One to many Non-real time; one to one - invisible, inaudible Little early in epoch; monopolistic tendencies later Electronic media Global - visually; constrained by language orally Real time One to many Non-real time - invisible, inaudible Largely monopolistic ...read more.