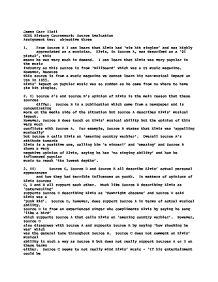 James Carr 11aii GCSE History Coursework: Source Evaluation Assignment two: objective three 1. From Source A I can learn that Elvis had 'six hit singles' and was highly appreciated as a musician. Elvis, in Source A, was described as a '$1 pistol', this means he was very much in demand. I can learn that Elvis was very popular in the music industry as this source is from 'Billboard' which was a US music magazine. However, because this source is from a music magazine we cannot learn his non-musical impact on USA in 1955. Elvis' impact on popular music was so sudden as he came from no where to have six hit singles. 2. i) Source A's and Source B's opinion of Elvis is the main reason that these sources differ. Source B is a publication which came from a newspaper and is concentrating more on the media side of the situation but Source A describes Elvis' musical impact. However, Source B does touch on Elvis' musical ability but the opinion of this very much conflicts with Source A. For example, Source B states that Elvis was 'appalling musically' but Source A calls Elvis an 'amazing country warbler'. ...read more.

However, this photograph taken of Elvis in Source F was taken in 1956, one year after the evidence in Source B and E had been published. Using my own knowledge I can say that Elvis has gone from attracting people by being controversial, as supported by evidence in Sources B and E, to being enjoyed by American society, as supported by Source F. By the 1950's 'teenagers' developed into people with different views and opinions than adults, also the threat of a nuclear war created a 'who cares?' approach in youth. I can also say, using my own knowledge, that in the 1950's youth's income had increased 10 times since the 1930's so businesses wanted to supply teenagers with their style of music, which meant Elvis' music was mass produced to meet youth's requirements thus making him more popular. Therefore, Sources E and F do support the evidence of Source B about the impact of Elvis Presley. 4. By 1957 youth had developed their own tastes, fashions, morals etc. but they were young and basically insignificant in terms of American society. They could not vote, therefore, their opinions did not matter. ...read more.

Because nearly every single family in America had a television Elvis' appearance on shows could be viewed throughout the nation. Source C supports the idea that Elvis' impact was more the result of television coverage of his performance than of his music. It states that 'if his entertainment could be confined to records' it might not have as big an influence. It also says that 'if TV companies would stop handling such stuff' his popularity would disapear. Other factors did affect Elvis' impact, factors such as how teenagers had 'seperated' themselves from adults. In the 1950's youths turned into 'anti-authority', 'anti-parents' and rebelious teenagers. This was the affect of of a nuclear war threat on America, which created the 'who cares?' attitude in youths. This idea was also aided by James Dean - 'the rebel without a cause'. Because youth had such a high disposable income they wanted to spend money on something that supported this anti-authority idea. So youth could afford to attend music concerts and buy merchendise, guitars and music. This aided the success of Elvis Presley. Overall I do believe that Elvis' impact on US society during the 1950s was more the result of television coverage of his performance than of his music. ...read more.