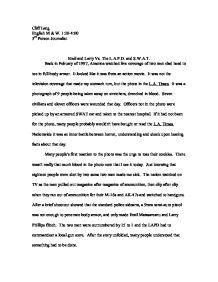 Cliff Lang English M & W. 1:20-4:00 3^rd Person Journalist Emil and Larry Vs. The L.A.P.D. and S.W.A.T. Back in Febuary of 1997, America watched live coverage of two men clad head to toe in full body armor. It looked like it was from an action movie. It was not the television coverage that made my stomach turn, but the photo in the L.A. Times. It was a photograph of 9 people being taken away on stretchers, drenched in blood. Seven civilians and eleven officers were wounded that day. Officers not in the photo were picked up by an armored SWAT car and taken to the nearest hospital. ...read more.

The two men were outnumbered by 15 to 1 and the LAPD had to commandeer a local gun store. After the story unfolded, many people understood that something had to be done. For people who don't normally even look at the paper today would see a surge in sales. People were horrified, but understood the need for the coverage. This was clearly a case of the public's "right to know". "Matasareanu and Phillips shot 3 police officers in the first five minutes, and kept shooting for 35 more minutes, firing more than 1,100 armor piercing bullets from AK-47 and SKS assault rifles." ...read more.

Police are relieved to hear that they are unlikely to run into these two again, and if it does happen, officers are ready this time. I am grateful that this story was covered the way that it was. After Emil and Larry killed eighteen people, I am relieved to know that police departments are more prepared for a similar incident in the future. "The brazen attack was covered by police helicopters hovering above the scene, some drawing fire from the suspects." (CNN). Even to this day, it is hard to imagine that anyone could match the ferocity and firepower of Emil and Larry. I was rapidly horrified by the image, understood why they used an eye-catching photo, and shocked at the impact of the story. ...read more.