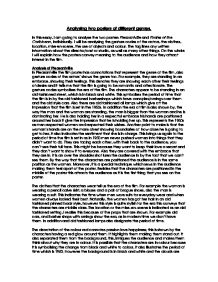 Analysing two posters of different genres. In this essay, I am going to analyse the two posters Pleasantville and Pirates of the Caribbean, individually. I will be analysing the gesture codes of the actors, the clothes, location, mise-en-scene, the use of objects and colour. The tag lines any written information about the director/cast or studio, as well as many other things. On the whole I will explain how the posters convey meaning to the audience and how they attract interest in the film. Analysis of Pleasantville In Pleasantville the film poster has connotations that represent the genre of the film, also gesture codes of the actors' shows the genre too. For example, they are standing in an embrace, showing their feelings. This denotes they are showing each other their feelings of desire and it tells me that the film is going to be romantic and affectionate. The gesture codes symbolises the era of the film. The characters appear to be standing in an old fashioned street, which is in black and white. This symbolises the period of time that the film is in by the old fashioned barbershops which have canopies/ornings over them and the old style cars. Also there are old fashioned oil lamps which give off the impression that the film is set in the 1950s. In addition the era of film is also shown by, the way the man and the woman are standing, the man is bigger than the woman and he is dominating her. ...read more.

People may not tell that it is a film poster so may look it up on the interne, again, getting publicity. Reviewing the way the characters are positioned the audience are encouraged to think that the man is in control and the woman is helpless and needs rescuing like a damsel in distress. I think this because he is standing with his legs apart leaning towards her very in command of her. She is standing leaning towards him with her hands on his chest very feeble. This tells me that they are positioned to represent the era because they are very stereotypical of what men and women were like in the 1950s. The two main actors are from the same racial group (white middle class society). This may be because the film is trying to represent people of that era that they were the same a close nit community. However it may be because they are applying to that particular society. Analysis of Pirates of the Caribbean The gesture codes in Pirates of the Caribbean shows what type of film it is going to be. For example it has got head and soldier shots of the actors in the film, this shows that they are serious and not messing around. Also Johnny Depp is holding a sword and a gun in the shape of an X. ...read more.

I identify this because the pictures of the actors are big and take up most of the poster. There is written information about the director and it is at the bottom of the page where most posters put their information. In the poster we can see the faces of the characters; however they all have one side covered or blackened. This infers secrecy as to why they are hiding or what they are hiding. This draws in the audience by the fact that they are covered. Besides that the characters are positioned at the top of the poster this attracts the audience as they are big and bold and it is the first thing that you see on the poster, apart form the title. It is a good balance of cast and plot, cleverly drawing in plot fans and cast fans. Looking at the way the characters are positioned the audience are encouraged to think that the men are in control and the woman is helpless and will need rescuing. I think this because they are looking very serious and are holding weapons where as she looks feeble and not in control. This tells me that they are positioned to represent the genre as pirates are mainly men and they fight to rescue women and to get treasure. The actors are from the same racial group. This may be because the film is trying to represent pirates as the majority or pirates were white and scary. ...read more.