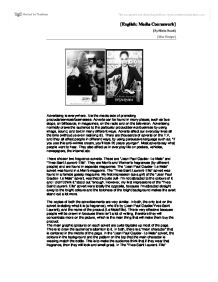 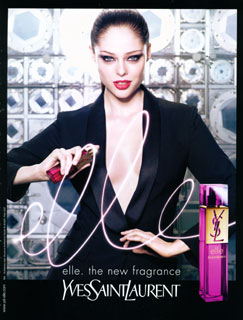 Advertising is everywhere. It is the media side of promoting products/services/businesses. Adverts can be found in many places, such as bus stops, on billboards, in magazines, on the radio and on the television. Advertising normally draws the audience to the particular product/service/business by using image, sound, and text in many different ways. Adverts affect our everyday lives all the time (without us even realizing it!). There are thousands of adverts on the T.V, and they all affect people in different ways, by using persuasive language such as; “If you use this anti-wrinkle cream, you’ll look 20 years younger”. Most adverts say what people want to hear. They also affect us in everyday life on posters, vehicles, newspapers, the internet etc.

The copies of both the advertisements are very similar. In both, the only text on the advert is stating what it is (a fragrance), who it’s by (Jean Paul Gautier/Yves Saint Laurent), and the name of the product (Le Male/Elle). This is very effective because people will be drawn in because there isn’t a lot of writing, therefore they will concentrate more on the picture, which is the main thing that will make them buy the product.

The product that is being sold (the brand) is a fragrance. On both the adverts I have chosen, there is a picture of the product in the bottom right corner. They are both fragrance bottles. The pictures of the products are important to the adverts as a whole, because they represent what the whole advert is about. They do this by making the graphics relate to the product picture (by using the same colours, patterns etc). In the “Jean Paul Gautier- Le Male” advert, the bottle of cologne matches the picture on the advert because the patterns & colours are the same. In the “Yves Saint Laurent” advert, again the bottle of perfume matches the picture on the advert because the colours are the same. The difference between the two fragrance bottles is that the “Yves Saint Laurent” bottle has the name of the product and who it’s by on it- whereas the “Jean Paul Gautier- Le Male” bottle does not.

In the “Jean Paul Gautier- Le Male” advert, there are three characters. There is a main male character that is centered in the middle, and there are also two other male characters which seem to look more laid back/not special. The main character is related to the cologne (because he’s wearing it), because his top matches the fragrance bottle and him standing up tall and strong represents how the bottle looks in general. In the “Yves Saint Laurent” advert, there is only one main female character. She is related to the perfume because the colour of her lipstick matches the colour of the bottle, and also she looks bold in front of the bright background, just like the bottle does on a black background. The relationship between the characters and the reader is the same in both adverts, being that people get jealous of that character/want to be more like them, therefore the characters convince them to go out and buy the product.

The still adverts doesn’t really tell more of a story than that they “stand out” because they’re wearing the fragrances. However, I watched the television adverts for them both of You-tube, and it makes the stories a lot bigger. In the “Jean Paul Gautier- Le Male” advert it basically shows lots of men in a changing room all hot and sweaty, passing round the cologne bottle. When each of the men sprays the cologne onto themselves, they instantly change from wearing nothing but a towel to sharp, designer suits. This tries to show the audience that anyone can wear the cologne, and that it will instantly make them stylish. In the “Yves Saint Laurent” advert, the main character walks into a room full of people and she is unnoticed. That is until she scrapes her heel onto the ground, pouts her lips and pulls out the bottle of perfume which the then sprays to write the word “Elle” in the air. The colour of the bottle, her lips and the word “Elle” are all the same. This is trying to tell the audience that if you are unnoticed in a crowd, then wear this perfume and you will “Stand out” and be noticed.

I found the “Jean Paul Gautier- Le Male” advert in a men’s car magazine. I think that this advert fits in the magazine where it was put because the target audience is young men, and it’s a men’s magazine. There are many other fragrance adverts in this magazine, and this one fits in perfectly. Men will be drawn to it and that’s how they get customers.

I found the “Yves Saint Laurent” advert in a woman’s gossip magazine. I think that this advert fits in the magazine where it was put because the target audience is women, and it’s a women’s magazine. There are lots of different adverts aimed at females in this magazine, but this one stands out because it was big on the page &women would be drawn to it.

The adverts as a whole, I would probably buy the “Yves Saint Laurent- Elle” fragrance because my attention is drawn to the bold, bright colours and the big picture. I think that the “Jean Paul Gautier- Le Male” advert is good, but the colours are a bit dull and aren’t as eye catching compared to the other advert- also I’m a female, so the idea of having big muscles & a six pack doesn’t make me want to buy the product.