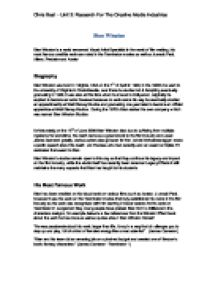 Stan Winston Stan Winston is a world renowned Visual Artist Specialist in the world of flim making, his most famous credible work are noted in the Terminator movies as well as Jurrasic Park, Aliens, Predator and Avatar Biography Stan Winston was born in Virginia, USA on the 7th of April in 1946, in the 1960's he went to the university of Virginia in Charlottesvile, over there he studied Art & Sculpting eventually graduating in 1968, it was also at this time when he moved to Hollywood, originally he aspired to become an actor however because no work came his way he eventually studied an apprenticeship at Walt Disney Studios and graduating one year later to become an official apprentice at Walt Disney Studios. During the 1970's Stan started his own company which was named Stan Winston Studios Unfortunately on the 15th of June 2008 Stan Winston died due to suffering from multiple myeloma for sometime, his death came as a great ...read more.

''He was passionate about his work, larger than life, funny in a way that challenges you to step up and play, full of a kind of frenzied energy like a mad scientist''. (James Cameron) ''Stan and his team did an amazing job on a pinched budget and created one of filmdom's iconic fantasy characters.'' (James Cameron -Terminator 1 ) ''Stan is the best I've ever worked with... He does not think of his work as special effects. Rather he sees his work as creating characters for film.'' (Tim Burton) ''I wouldn't have had the career I had in movies if it hadn't been for Stan. He helped me so much in Terminator - and Predator. He is a genius who carved a special niche for himself.''(Arnold Schwarzenegger). ''His creations are the creations of horror and fantasy and science fiction and imagination and pure unmitigated genius. ...read more.

Release Date - 11th Of January 1985 (UK) - 26th of October 1984 (USA) Duration - 1hr & 47 mins (approx) Director - James Cameron Budget -$6,400,000 (estimated) Gross - $78,371,200 (Worldwide) The opening weekend of The Terminator in cinemas gained approximately $4,020,663 in the US shown over across 1,000 screens, the next week the film gained more success in terms of gross at approximately $4,219,463 shown at 1,112 screens, after this however The Terminator gained less gross in due to being shown in less screens across the US. Dates that the film shoots took place were between 8th of February 1984 - 12th of May 1984 Main Cast Arnold Schwarzenegger - The Terminator Linda Hamilton - Sarah Connor Michael Biehn - Kyle Reese Paul Winfield - Lieutenant Ed Traxler Lance Henriksen - Detective Hai Vukovich Bess Motta - Ginger Ventura Earl Boen - Dr Peter Silberman Stan Winston had a major impact on the making of the first Terminator movie, it was because of this success that led him to becoming one of the film industries best visual artists. ...read more.