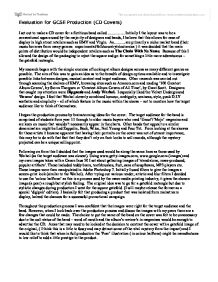 Evaluation for GCSE Production (CD Covers) I set out to make a CD cover for a fictitious band called ............. Initially I the layout was to be a conventional square used by the majority of designers and bands, I believe that this allows for ease of display in high street retailers such as HMV and Virgin. As.........are primarily a niche market band (their music borrows from many genres: experimental/folk/country/electronica ) it was decided that the main points of distribution would be independent retailers such as The Chain With No Name. Because of this I allowed the design of the packaging to reject the square and go for something a little more adventurous - the gatefold rectangle. My research began with the simple exercise of looking at album designs across as many different genres as possible. ...read more.

The target audience for the band is comprised of students from year 11 through to older music buyers who read 'Uncut'/'Mojo' magazine and are keen on music that wouldn't necessarily appear in the charts. Other bands that appeal to a similar denomination might be Led Zeppelin, Beck, Wilco, Neil Young and Four Tet. From looking at the sleeves for these artists it became apparent that having their portraits on the cover was not of utmost importance, this may be to do with that fact that they don't rely on their looks to sell records, although the mystery projected can be a unique selling point. Following on from this I decided that the images used would be along the same lines as those used by Warhol (as the target audience was closest). ...read more.

Throughout the production process I was confident that the images were right for the target audience and the band. However, when I look back over the production process and discus the images with my peers there are a few changes that could be made. The choice to put the name of the band on the cover was felt to be unnecessary due to the cult status of the band - word of mouth and the album's review's in magazines would be enough to advertise the CD. Areas that may need to be looked at the decision to contrast the cover with a gatefold image of the original, ( I think this is a little to fussy and may detract some of the vital mystery from the impact) and I would like to think that when in full production the 'Pear' illustration ( in colour halftone) might be manufactures in low relief to add a little prestige to the product. ...read more.