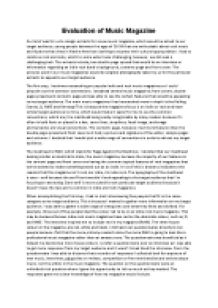 Evaluation of my design for a music magazine

﻿Evaluation of Music Magazine Our brief was for us to design extracts for a new music magazine, which would be aimed to our target audience, young people between the ages of 16-24 that are enthusiastic about rock music and hipsters that dress in Native American clothing to express their cultural appropriation. I had to combine rock and indie, which to some extent was challenging, however, we did seek a challenging task. The extracts include; two double page spread that would be an interview or information regarding an indie rock band?s background, contents page and front cover. The pictures used in our music magazines would be original photography taken by us for the particular extracts to appeal to our target audience. The first step, I took was researching on popular indie and rock music magazines so I could pinpoint out the common conventions. I analysed several music magazine; front covers, double page spreads and contents page and was able to see the certain features that would be appealing to my target audience. The main music magazines I had researched more in depth is the Rolling Stones, Q, NME and Kerrang! This is because the magazines focus is on indie or rock and have similar target audience to mine, which would make it easier for me to see the common conventions, which are; the masthead being easily recognisable by many readers because it?s often in bold fonts or placed in a box, cover lines, straplines, focal image, anchorage and barcodes are visual conventions. ...read more.

It?s a shame Idil and I didn?t choose the rock genre and had to converse on indie rock because she wanted to do a magazine about indie. The representation of indie rock wasn?t as difficult for me to do because I?ve listed most of it on the mind-map that all I had to do was write it in paragraphs with more detail discussing the music genre and the target audience. I learnt that indie rock is represented as the ?good side of rock? because the bands of indie rock are not arrested or convicted of crimes and aren?t consuming drugs. Bands like The Strokes, Arctic Monkeys, and Death Cabs for Cuties, The Black Keys, Stone Roses and Arcade Fire are portrayed to be angels when compared to other bands and artists. The house colours are red, white and black for the music magazine RAM. This is purely because after analysing many music magazine that specialise in rock and indie rock, I?ve drawn collisions that red, yellow, blue, white and black are repeated several times in those magazines. I?ve chosen the three of my favourite colours from the colours I stated as most repeated. Red is the colour of blood, blaze and rubies. It is the shade toward the end of the noticeable range alongside orange, and at the inverse end from violet. Since it is the colour of blood, red has verifiably been connected with reparation, peril and boldness. ...read more.

The front cover of RAM needed more improvements because it didn?t follow the house colours. This is because the front cover is red, blue, yellow and black when it was supposed to show black, red and white as the dominate colours. My partner and I had to make a few adjustments because the focal image and the masthead are already perfectly done. The double page spread I helped my partner had also needed a few adjustments for the same reason as the front cover. The final extracts are exactly as I have versioned or even better. I was focusing on having majority of the music magazines conventions for all the extracts because than it would look more professionally done. The contents page is following the house colours, has a column with page numbering, the focal image stands out and is purposely following the house colours by wearing red and black, the masthead is clear and detectable. My double page spread was similar to the contents page as it follows the house colours. However, I used a different kind of layout for it to make it like a profile because from Survey Monkey and questionnaire I discovered that my target audience like posters and profiles so I insisted that I have it somehow in RAM. I used several original pictures on my double page spread like profile. The article on the double page spread is brief and simple because my target audience aren?t interested in reading long worded essay and something brief and simple to read quickly. Overall, it turned out really well. ...read more.