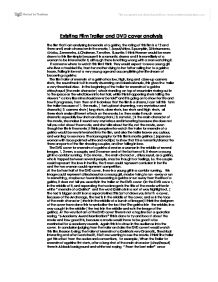 Existing Film Trailer and DVD cover analysis The film that I am analysing is memoirs of a geisha, the rating of this film is a 12 and there are 8 main characters in the movie, 1.Sayuri/chiyo, 2.pumpkin, 3.Hatsumomo, 4.Nobu, 5.memeha, 6.Chairman, 7.mother, 8.auntie. I think Woman would be more drawn to this film simply because it is a romantic drama and it is more likely of a woman to be interested in it, although there is nothing wrong with a man watching it. If someone where to watch this film I think they would expect to see a young girl who lives a troubled life, from her mother dying to her father selling her to a geisha house, Falling in love at a very young age and accomplishing her life dream of becoming a geisha. The film trailer of memoirs of a geisha has low, high, long and close-up camera shots, the soundtrack to it is mostly drumming and classical music, this gives the trailer a very theatrical view. In the beginning of the trailer for memoirs of a geisha chiyo/sayuri (the main character) ...read more.

It Connotes , the main character , chiyo.sayuri, as a geisha, who is trapped between several people, maybe thoughts or feelings, i.e. the couple could represent the love in her life, the 2 men could represent confusion in her life and the two woman could represent competition. At the bottom half of the DVD cover, there is a young girl in a corridor running, this image could represent chiyo/sayuri as a young girl, maybe trying to run-away or run to something., maybe run towards becoming a geisha or run away from the life of a geisha, it does not tell you exactly in the trailer or the DVD cover. On the DVD cover, in the middle of it, and separating the two images is the title of the movie written in white " memoirs of a Geisha" and the word Geisha is in a sort of way highlighted , ( The text is bigger and it is on a separate line) This Sort of draws you into the cover, Because of the Anchorage, The text is in the middle of the cover, and so is the face of the main character ( she is in the middle of a bunch of images) ...read more.

........and so on. The camera shots are mostly long shots and low angles, all these effects that the trailer has, makes it very dramatic and theatrical, which once again draws the audience in, and makes you want to watch it. The length of the trailer is 2minutes 34seconds long, which is the approximate length of a typical movie trailer. The enigma of memoirs of a geisha is a bit on the trailer where you see a young child being dragged away from something, and she is screaming, it is raining and you can hear thunder, and you automatically want to know what's happening. Overall I would give the trailer for Memoirs of a geisha a 10/10 because it is theatrical, dramatic, romantic, interesting and leaves you wanting more, which I believe is the key to a successful movie trailer. For the video cover for memoirs of a geisha however I would only give a 5/10 because even though it is a interesting cover it is not very attractive and it did not either draw me into it or make me want to watch it. ...read more.