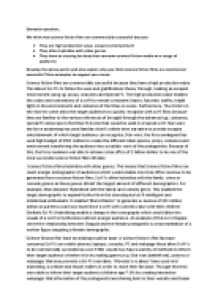 Explain why you think science fiction films are commercial successful? Give examples to support your views.

Transfer-Encoding: chunked ﻿Exemplar question: We think that science fiction films are commercially successful because: * They are high production value, escapist entertainment * They often hybridise with other genres * They have an existing fan base that consume science Fiction media on a range of platforms Develop the above points and also explain why you think science fiction films are commercial successful? Give examples to support your views. Science fiction films are commercially successful because they have a high production value. This allows Sci-Fi?s to follow the uses and gratifications theory through creating an escapist environment using cgi, props, costumes and Special FX. The high production value enables the codes and conventions of a sci-fi to remain consistent (lasers, futuristic outfits, bright light) ...read more.

Science fictions films hybridise with other genres. This means that Science fiction films can reach a larger demographic of audiences which would enable more box office revenue to be generated from a science fiction films. Sci-Fi?s often hybridise with the family, crime or comedy genres as these genres attract the largest amount of different demographics. For example, Mars Attacks! Hybridised with the family and comedy genre. This enabled the target demographic to expand further form the stereotypical sci-fi intelligent and intellectual enthusiasts. It enabled ?Mars Attacks!? to generate a revenue of 100 million dollars as parents could now experience a sci-fi with comedic value with their children. Similarly Sci-Fi?s hybridising enable a change in the iconography which would allow the visuals of a sci-fi to furthermore attract a larger audience. ...read more.

Through this they were able to inform their target audience (children age 7-14) by creating interactive webpages that information of the protagonists and sharing links to their website and teaser trailers on social media platforms. Sci-fi films who have used this are successful as the intuitions were able to reach their target demographics by the how much the target audience uses each platform. Science fiction films are commercially successful because they hybridise with other genres, have high production values and have an existing fan base that consume sci-fi on various media. This is because the hybridisation allows science fictions films to target a larger demographic whilst the high production value engrosses the audience into the narrative. Additionally, the existing fan base that consume on various media enables Science fiction films to advertise to various devices ensuring that the target audience would be informed about the Sci-fi film. ...read more.