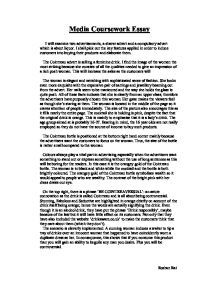 Media Coursework Essay I will examine two advertisements, a shaver advert and a compulsory advert which is about liquor. I shall pick out the key features applied in order to induce customers into buying their products and elaborate them. The Cointreau advert is selling a feminine drink. I find the image of the women the most striking because she consists of all the qualities needed to give an impression of a rich posh woman. This will increase the sales as the customers will The woman is elegant and ravishing with sophisticated sense of fashion. She looks even more exquisite with the expensive pair of earrings and jewellery beaming out from the advert. Her nails seem to be manicured and the way she holds the glass is quite posh. All of these facts indicate that she is clearly from an upper class; therefore the advertisers have purposely chosen this woman. Her gaze makes the viewers feel as though she's staring at them. ...read more.

The woman is in black and white while the cocktail and the bottle is both brightly coloured. The orangey gold of the Cointreau bottle symbolises wealth so it would appeal to people who are wealthy. The contrast of the bright pink with her dress draws our eye. On the top right, there is a phrase 'BE COINTREAVERSIAL': an astute connotation as the drink is called Cointreau and is all about being controversial. Stunning, Fabulous and Seductive are highlighted in orange chiefly on account of the drink itself being orange; hence the words are actually signifying the drink. Even though it is an alcohol drink, they have put the phrase 'Drink responsibly', maybe because of the law but it will have little effect on its customers. Not only that they have also included the website 'drinkaware.co.uk' to make the customers think that they care about them (which they don't). The scenario is cleverly implemented: A cunning woman induces a waiter to tip a tray of drinks over an innocent woman that happened to have coincidently worn a duplicate dress as her. ...read more.

The advertisers have contrived a clever phrase: 'WHY A RAZOR THAT USES THE WORLD'S HARDEST STEEL CAN'T PIERCE YOUR SKIN'. The use of language is quite fundamental and the message it is carrying is easy to comprehend. Words like hardest steel will definitely amuse the audience. There is extra information given about the shaver which I think is merely irrelevant. Now all the facts have been taken into consideration, I will give my conclusion. Overall I think the shaver advert is the most effective in comparison to the drink advert. I strongly disagree with the whole concept of the drink advert as some people might misinterpret it. However, the use of colours, language and positioning are brilliantly done. But as the whole scenario was about being controversial, I think they should have used a woman with a slyer look rather than just a glamorous one. I preferred the shaver advert chiefly because of the balloon bit. It draws attention quicker than the drink advert does while readers are flicking through pages. The advertisers though could have amended the advert in the colour bit. ?? ?? ?? ?? Roshan Rai ...read more.