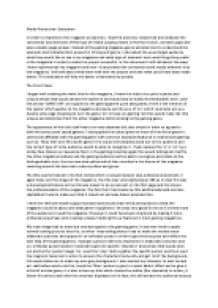 ﻿Media Production- Evaluation In order to implement this magazine production, I had first planned, researched and analysed the convention and elements of this type of media usually present in the front cover, contents page and also a double page spread. I looked at the gaming magazine genre and also tried to understand the elements and characteristics present in this type of genre, I also asked the usual target audience what they would like to see in my magazine and what type of elements and usual things they prefer in the magazine in order to make the project successful. In this document I will talk about the ways I have implemented my magazine and how I incorporated the conventions and media elements into the magazine, I will talk about what went well with the project and also what could have been made better. This evaluation will help me better understand my project. The Front Cover I began with creating the main title for the magazine, I knew this had to be quite a catchy and unique phrase that would attract the audience and would also be easily remembarable, and I used the phrase ?GAME ON!? as it applies to the gaming genre quite adequately, there is the mention of the ?game? which applies to the magazine obviously and the pun of ?on? which could also act as a double entourage (meaning to turn the game ?on? or keep on gaming ?on) ...read more.

The structure and formation of the phrases and sentences are quite informal and chatty, this is to allow the audience to get friendly and familiar with the magazine and get more detail in-depth when the open the magazine (which gives them an excuse to buy the magazine) it also helps to connect with the audience. To make this element better I could have used different types of fonts and maybe varied the colour scheme as this would give my magazine a more versatile appearance. I had also added standard features such as barcode, price, issue date I order to make it as authentic as possible. Contents Page Again I followed the text font and the colour scheme of the magazine in order to keep consistency with every part of the magazine, I had however used grey in my typography and as a way to present my headlines and news, I used a very dark grey so it would stick out from the light grey background, using this grey gave it quite a distinctive look and made it seem quite professional. I had again made the title big, however it did not have the same amount of prominence as it had on the front page and this was done purposely as the title did not have too much importance to this part of the magazine as the front cover title did, I had also complimented the title with a ...read more.

Not too many images were used in the double page spread however the limited amount of images that were used were to good effect, I had used a ?real? football character with a ?virtual? football character and used the line (to separate the two pages) in the middle as a mirror (one showing the real footballer and one the other) both seemed as if they were mirrored and displayed the games graphics technology, I had also used the images of some balls which I individualised and collaborated together, again I wanted to make them game like so I added a ?cut out? effect to them in order to do so; I also complimented them with a caption as magazines conventionally do. I had also used pull quotes in my double page spread under the paragraphs they were extracted from to draw attention to the reader and towards a specific line of text. I made them distinctive by making them a different colour and formatting them in all capitals. Like a typical gaming magazine I have included summary points for the readers and also a game rating, this followed the traditional stereotypical conventions of a gaming magazine. I think my double page spread was done to an excellent level, I had made it more serious looking then all the other pages however also gave it a casual touch, I think my double page spread could have been improved if it had more images maybe to support the review as this is common in most gaming magazines. ...read more.