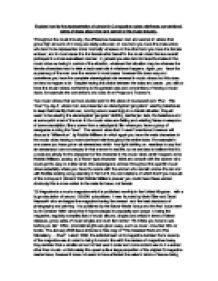 Explore how far the representation of gender in Q magazine covers reinforces conventional points of views about men and women in the music industry.

Explore how far the representation of gender in Q magazine covers reinforces conventional points of views about men and women in the music industry. Throughout the music industry, the differences between men and women in videos that gross high amounts of money are really quite vast, on one hand you have the male actors who tend to be represented more 'normally' whereas on the other hand you have the female actress', and in most cases it is the female artist herself in the music video that are overall portrayed in a more sexualised manner. In general you also tend to have the males in the music video as being in control of the situation, whatever that situation may be whereas the female characters tend to take a back seat role in whatever happens. Again, you have the supremacy of the man over the women in most cases however this does vary and sometimes you have the complete stereotypical role reversal in music videos but this does not tend to happen a lot. ...read more.

The second video that I haven't mentioned however will discuss is "Millennium", by Robbie Williams in which again you have the male characters in the music video having a more dominant role throughout the entire video. For example in one scene you have got an air stewardess which has tight clothing on, needless to say that air stewardess' are not dressed in that manner in real life, so we are lead to believe that it is a costume simply for the enjoyment of the character in the music video which happens to be Robbie Williams, posing as a 'Bond' type character. Slick and smooth with the women who could get his way no matter what, this stereotype is echoed throughout this specific music video especially where you have the scene with the women who are lain across the car and with Robbie looking smug standing in front of it, the connotations of which that if you ...read more.

The January 2006 issue included a free copy of "The Greatest Rock and Pop Miscellany ... Ever!". Late in 2008, the editorial team at Q magazine decided that a revamp of the magazine was in order to bring it more in line with the readers of magazines today, they decided that a smaller amount of text was in order and more content was to be added other than music- unfortunately this upset quite a large proportion of the original Q magazine reader base, however it does not seem to have affected the sales in terms of issues being sold on a monthly basis. Q has recently launched their own radio station, with a complete roster of presenters alongside with their music channel Q with is available to anyone living in the UK. Not just this but on a yearly basis, Q holds their own awards ceremony, quite like the Brits, just on a smaller scale called the Q awards, inviting red carpet acts to receive awards. ?? ?? ?? ?? ...read more.