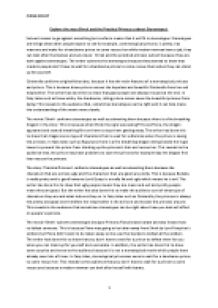 Explore the ways Shrek and the Practical Princess subvert Stereotypes!

﻿Zohal JALALY Explore the ways Shrek and the Practical Princess subvert Stereotypes! Subvert means to go against something but conform means that it will fit in stereotypes. Stereotypes are things what other people expect to see for example, a stereotypical princess is pretty, has manners and waits for a handsome prince to come rescue her while modern woman have a job, they can look after themselves and are clever. Shrek and the practical princess subvert because they are both against stereotypes. The writer subverts the stereotypes because they wanted to show that modern people don?t have to wait for a handsome prince to come rescue them when they can stand up for yourself. Cinderella conforms original fairy tales, because it has the main features of a stereotypical princess and prince. This is because brave prince rescues the hopeless and beautiful Cinderella from her evil stepmother. The writer has done this to show that good people are always rescued at the end. ...read more.

This reveals to the audience that sometimes stereotypes can be right about how you look will effect on people?s opinions. The movie ?Shrek? subverts stereotypes because Princess Fiona knows karate and also knows how to defeat someone. This is because Fiona was going to be taken away from Shrek by Lord Farquhar?s soldiers but Fiona didn?t want to be taken away so she used her karate to defeat all the soldiers. The writer had done this to show that you don?t have to wait for a prince to defeat them for you when you can stand up for yourself and use karate. In addition, the writer has done this to show some surprise and tense to the audience because it is not a stereotypical movie which people have already seen lots of times. In fairy tales, stereotypical princesses were to wait for a handsome prince to come rescue her. This reveals to the audience that you don?t have to wait for a prince to come rescue you because a modern woman can look after herself with karate. ...read more.

The writer has done this to show that this world is home to many greedy and selfish people but also to show some tense to the audience that the princess is not going to marry a charming prince. In fairy tales such as Cinderella, there were no greedy lords, only wicked stepmothers. This reveals to the audience that, sometimes things might not go as planned and the princess might not marry the charming prince after all. It also reveals that sometimes stereotypes can be wrong. Altogether, I think Shrek and the practical princess subverts stereotypes of fairy tales such as Cinderella. This is because in the movie ?Shrek? Princess Fiona knows karate and how to look after herself. However in the story ?Practical Princess? Prince Persian had a long beard instead of Bedelia having long hair. The writers of these stories made it so successful that the viewer cannot help but to watch on. Also, the writer has made the story very clear but not that clear so that the viewer will know what happens next. They can just keep guessing ON! ...read more.