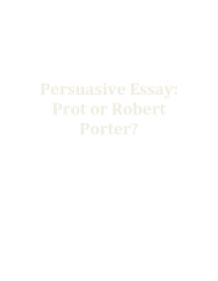 ﻿Persuasive Essay: Prot or Robert Porter? Abiram Narthanakumar Mr. Accardi ENG-4U1 Friday, July 13th, 2012 Prot or Robert Porter? Prot appears to be a human figure, who some may think is a lunatic due to the fact that he claims that he is from another planet called KPAX. Firstly, humans are incapable to understand a dog, when it barks and responds back. In KPAX Prot communicates with Dr. Mark Powell?s dog and then tells Dr. Powell?s kids what their dog had said. Also, when hypnotized Prot is still talking describing life on KPAX, he is under compulsion therefore meaning that he is not lying. Prot declares, that he is returning to KPAX on the 27th of July, and Bess would like to be taken away to KPAX with him. ...read more.

When Natalie, Dr. Powell?s daughter, witnesses Prot talking to Chaster and receiving responses from her, she is stunned and she states, ?no way? as if what Prot had just done is impossible for a human or ?its out of this world?. Due to the fact that Prot can receive answers and communicates with dogs more effectively with humans, substantiates that he is not human. Hypnosis, ?a state that resembles sleep but that is induced by suggestion?(dictionary.com). Even though, Prot was under compulsion he was still talking about life on KPAX. When under hypnosis he thoroughly and descriptively explains life on KPAX and the story of his human friend from Earth, Robert Porter. When under hypnosis Prot differentiates the calendar on Earth and KPAX when he says, ?its 1991, according to your Earth calendar? (KPAX) ...read more.

When Bess turns in her essay to Prot, this essay states why she should be the one chosen to go with Prot to KPAX and on July 27th Bess was missing. In conclusion, Prot is an alien from the planet KPAX. Reasoning for this is because Prot is able to communicate with dogs and they respond back to him in the ?dog language?, also known as barking. Next, even though he was under compulsion he was still claiming that he is from the planet KPAX. Therefore meaning he is an alien because one cannot simply lie while under compulsion. Lastly, near the end of the movie on July 27th Prot leaves Earth to return to KPAX in the human figure of Bess; leaving behind Robert Porter?s paralyzed body. This goes to show you that Prot is an alien from the planet KPAX and is not a lunatic nor is he mentally ill. ...read more.