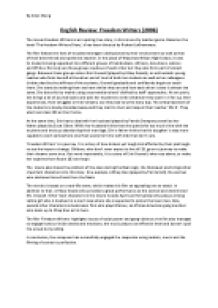 ﻿By Allen Zheng English Review: Freedom Writers (2006) The movie Freedom Writers is an inspiring true story, in this inner-city teacher genre. Based on the book ?The freedom Writers Diary?, it has been directed by Richard LaGravenese. The film follows the lives of troubled teenagers disillusioned by their environment as well as that of their determined and optimistic teacher. In the place of Woodrow Wilson High School, it sees its students being separated into different groups of Cambodians, Africans, Americans, Latinos and Whites. Not only are these groups cautious of each other but they also form part of violent gangs. Between these groups enters Erin Gruwell (played by Hilary Swank), an enthusiastic young teacher who finds herself at the other end of trust of both her students as well as her colleagues. ...read more.

their experiences, their struggles or their dreams, but they had to write every day. The embarrassment of the students is slowly discarded away and they start to trust and respect their teacher ?Ms G?. They also treat class 203 as their home. At the same time, Erin has to deal with her husband played by Patrick Dempsey as well as her father played by Scott Glenn. While her husband thinks that she spends far too much time with the students and ends up abandoning their marriage, Erin?s father thinks that his daughter is way more capable to work somewhere else than waste her time with kids that don?t care. ?Freedom Writers? is a journey. ...read more.

The movies is based on a real-life event, which makes this film an appealing one to watch. In addition to that, is Hilary Swank who provided a great performance as the excited and determined Ms. Gruwell. Other main characters in the movie include April Lee Hernandez who plays a strong Latino girl who is involved in a court case where she is expected to protect her own race. Also, several other characters include Jason Finn who plays Marcus, an African-American gang member who looks up to Miep Gies as his hero. The film ?Freedom Writers? highlights issues of racial power and gang violence, the film also manages to engage humour inside drama and emotions, the music plays to an effective level and doesn?t spoil the actual story-telling. In conclusion, the composer has successfully engaged the responder using realism, music and the filming of scenes to perfection. ...read more.