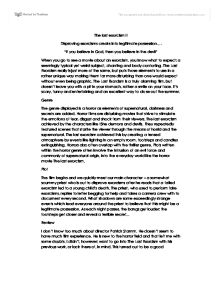 Film review. The Last Exorcism is a truly alarming film, but doesnt leave you with a pit in your stomach, rather a smile on your face. Its scary, funny and entertaining and an excellent way to close out the summer.

The last exorcism!!! Disproving exorcisms creaks into legitimate possession.... "If you believe in God, then you believe in the devil" When you go to see a movie about an exorcism, you know what to expect; a seemingly typical yet weird subject, chanting and body contorting. The Last Exorcism really is just more of the same, but puts those elements to use in a rather unique way making them far more disturbing than one would expect without even being graphic. The Last Exorcism is a truly alarming film, but doesn't leave you with a pit in your stomach, rather a smile on your face. It's scary, funny and entertaining and an excellent way to close out the summer. Genre The genre displayed is a horror as elements of supernatural, darkness and secrets are added. Horror films are disturbing movies that strive to stimulate the emotions of fear, disgust and shock from their viewers. The last exorcism achieved by the characters like t5he demons and devils. They repeatedly featured scenes that startle the viewer through the means of horrid and the supernatural. ...read more.

This turned out to be a good impression because The Last Exorcism, despite still being a flawed film, far exceeds my worries about Stamm's short list of directorial films. Where this film doesn't do so well is with our main character. He is scamming a poor grieving family out of money for an exorcism he faked. Granted, the priest's demeanour and intentions tilt to the side of righteousness towards the end of the film but at that point I felt it was too late. Tension in the score doesn't always foreshadow an instant jump, and sometimes the payoff comes when you are least expecting it. For those looking for a scary film, you will have to temper expectations. The real treat here is the story and the ability to set up expectation, and then quickly swerve in a different direction, leaving you solving what is truly happening. We are given a restricted viewpoint, and left to fill in the blanks with our mind. Zoltan Honti's cinematography makes this story really come to life. The technique he applied is to just keep it simple and stick with what really works. ...read more.

Possibly the whole closing situation might have been more believable had we had not zipped through it so quickly. Then again, what else can you imagine from a film dealing with such intense subject matter? It has to come to a lavish conclusion and while it may not be easily digestible, everything leading up to the moment is so gripping it makes it appetizing enough. We are left with a raw and thin horror film that leaves much to be discussed and divided after the lights come up. With a absorbing performance by Ashley Bell and a haunting theme and storyline, The Last Exorcism is elevated beyond the average horror film and illustrations that even in a world where so much is rehashed and carved from the same stone, surprises can still be found. Verdict Is The Last Exorcism a bad film? Not really. It has rather a few decently creepy moments and it feels like sincere effort and attention was put into it. Don't go searching for another Exorcist or The Exorcism of Emily Rose to compare because Stamm's film doesn't quite match up. It is worth at least one watch. Not bad, but not something you're going to want to re-spin in your DVD player too often. Star rating= *** Date: 28/1/11 ...read more.