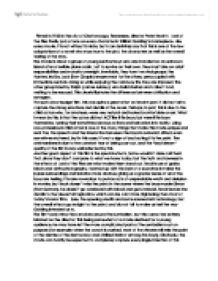 Filmed in 1963 in the city of Chattanooga, Tennessee, director Peter Brooks Lord of the Flies finally puts a face on every character in William Goldings masterpiece.

Filmed in 1963 in the city of Chattanooga, Tennessee, director Peter Brook's Lord of the Flies finally puts a face on every character in William Golding's masterpiece. Like every movie, it is not without its nicks, but I can definitely say that this is one of the few adaptations of a novel who stays true to the plot, the characters as well as the overall feeling of the story. The movie is about a group of young survivor boys who are stranded on an unknown island after a terrible plane crash. Left to survive on their own, they must take on adult responsibilities and maturity overnight. Inevitably, they form two rival groups: the Hunters, led by Jack (Tom Chapin) ...read more.

Yes, the speech and the interaction between the boys is awkward, stilted, even sometimes stuttered, but in this case, it's not a sign of bad acting; it is the point. The awkwardness is due to the constant fear of being cast out, and the "bad dream" quality of the film is very well reflected by this. Another great aspect of this film is the special effects. Some wouldn't dare call them that, since they don't compare to what we have today, but the truth and rawness in the effects of Lord of the Flies are what makes them stand out. Brook's use of grainy black-and-white photography, teamed up with the lack of a soundtrack makes the joyless surroundings and isolation more obvious, giving us a greater sense of what the boys are feeling. ...read more.

Obviously, the movie can hardly be expected to completely capture every single intention of this highly complex novel, but it does however respect Golding's words and stays true to what he was trying to say, even if Brook does put it in the simplest way, leaving all spirituality and complexity out of it. In conclusion, Peter Brook's 1963 representation of Lord of the Flies uses every aspect of the novel to make the viewer feel like they are part of the dramatic thriller, without steering away from what William Golding intended to share. Most people might overlook the little details and the powerful simplicity that make this film so great, which is a shame because this one is truly a classic. ...read more.