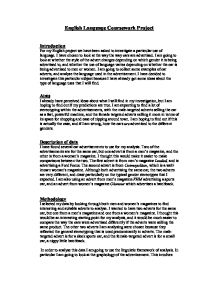 For my English project we have been asked to investigate a particular use of language. I have chosen to look at the way the way cars are advertised.

English Language Coursework Project Introduction For my English project we have been asked to investigate a particular use of language. I have chosen to look at the way the way cars are advertised. I am going to look at whether the style of the advert changes depending on which gender it is being advertised to, and whether the use of language varies depending on whether the car is being advertised to men or women. I am going to collect some examples of car adverts, and analyse the language used in the advertisement. I have decided to investigate this particular subject because I have already got some ideas about the type of language uses that I will find. Aims I already have perceived ideas about what I will find in my investigation, but I am hoping to find out if my predictions are true. I am expecting to find a lot of stereotyping within the advertisements, with the male-targeted adverts selling the car as a fast, powerful machine, and the female targeted adverts selling it more in terms of its space for shopping and ease of nipping around town. I am hoping to find out if this is actually the case, and if I am wrong, how the cars are advertised to the different genders. Description of data I have found several car advertisements to use for my analysis. Two of the advertisements are for the same car, but one advert is from a men's magazine, and the other is from a woman's magazine. I thought this would make it easier to make comparisons between the two. The first advert is from men's magazine Loaded, and is advertising a Ford Focus. The second advert is from Cosmopolitan, which is a well-known woman's magazine. Although both advertising the same car, the two adverts are very different, and draw particularly on the typical gender stereotypes that I expected. ...read more.

First I looked at the advertisement for the Renault Clio, which came from women's magazine Glamour. The advert shows a room of white furniture, quite simplistic, that has white walls and carpets and some wooden furniture, but overall is a plain room. In the middle of the room sits the car. It is bright red and turned slightly to the side so we can see the front and a side view of the car. The advert compares the plain minimalist room and the bright vivacious car, well equipped with all its high tech accessories and features. The relevance of the plain room and the bright car are clear when you read the slogan of the advert "Now engineered for extra Va-Va-Voom". The relevance of the plain room is to imply that the owner of the room is boring, and in need of "Va-Va-Voom" which presumably means that it needs livening up. The slogan "Va-Va-Voom" is used throughout the advert. It has the connotations of sexy women, feathers and fluffy slippers, and gives the impression of fifties glamour. Va-Va-Voom may also be onomatopoeic, a play on words for 'vroom' like the noise that cars are described as making. It is used four times in the advert, the repetition presumably for emphasis. It is used twice in the passage describing the car features, once in the slogan for the car, and it is also in the website address. (www.va-va-voom.co.uk) The advert has the manufacturers logo in the top left corner, and the brand slogan "Createur D'automobiles" next to it. This is used because the make of the car, Renault, is French, and they have chosen to use the original French for the slogan. It also lends the advert and the car an air of sophistication. This slogan is used in all of Renaults car adverts, and because the French reads practically the same as the English would, it is easily understandable by anyone about what it means. ...read more.

The James Bond theme is also suitable for the advert because James Bond drove a Lotus Elise in one of his more recent films. Conclusion From looking at both these adverts, I have noticed several similarities between the two, despite their being aimed at two different audiences. While they are being advertised in different ways, both adverts are being sold to their respective target on the basis of looks. The Loaded advert being sold more on the image of being sleek and powerful, a really masculine car. And the women's advert in Cosmopolitan appealing more to the fashionable woman, being sold on its versatility, of being a stylish, yet practical car for a woman's needs. My preconceived ideas about cars being advertised in a stereotypical way was right to a certain extent, but I didn't expect to see as many similarities between the two as I did. I expected the advert aimed at men to focus on the speed and power of the car, which it kind of did, more so the power than the speed, but I didn't expect the car to be sold on appearances very much at all, and that came as a surprise to me. The female-targeted advertisement was very similar to what I expected. It portrayed women as wanting boot space for their bags and luxury accessories such as air conditioning and a CD player. The way the car was advertised was very clever, and in both cases, the language used really did imply accurate connotations. If I had to repeat this research, I would like to look at different car adverts for men and women to see if other adverts use this gender stereotyping. I would also want to look at advertisements aimed at a different target audience. It would be interesting to see how an advert for a family car compares to the adverts aimed at young men and women. I would like to investigate which aspects of the car the advert would focus on for a family car. ...read more.