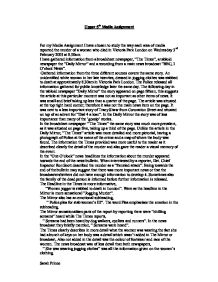 For my Media Assignment I have chosen to study the way each area of media reported the murder of a woman who died in Victoria Park London on Wednesday 3rd February 2003 at 8.30am.

Upper 5th Media Assignment For my Media Assignment I have chosen to study the way each area of media reported the murder of a woman who died in Victoria Park London on Wednesday 3rd February 2003 at 8.30am. I have gathered information from a broadsheet newspaper, "The Times", a tabloid newspaper the "Daily Mirror" and a recording from a main news broadcast "BBC, 1 O'clock News". Gathered information from the three different sources covers the same story. An unidentified white woman in her late twenties, dressed in jogging clothes was stabbed to death at approximately 8.30am in Victoria Park London. The Police released all information gathered for public knowledge later the same day. The following day in the tabloid newspaper "Daily Mirror" the story appeared on page fifteen, this suggests the article at this particular moment was not as important as other items of news. It was small and brief taking up less than a quarter of the page. The article was situated at the top right hand corner; therefore it was not the main news item on the page. It was next to a less important story of Tracy Shaw from Coronation Street and situated on top of an advert for "Dial 4 a loan". In the Daily Mirror the story was of less importance than many of the 'gossip' stories. In the broadsheet newspaper " The Times" the same story was much more prevalent, as it was situated on page five, taking up a third of the page. ...read more.

The Mirror also sensationalises the news piece more than the Times and the Broadcast describing " chilling screams" were heard whereas the Times, " Screams had been heard by dogwalkers..." mentioning the screams this way is desationalises as it involves 'sane' people, i.e. dogwalkers. Were as the Broadcast it keeps the information simple, keeping detail brief, "Screams were heard". This was the only detail the Broadcast felt was essential which was the fact the women screamed not who heard etc. Parts of the Times help the reader by offering suggestions for example, " This women had either gone jogging or was walking to the local shops". The Mirror and the Broadcast gives the bare minimum story and does not go into detail. The Times quotes from "Police sources" where as the "Police were last night trying..." was written by the Mirror and with the broadcast " The police say....". Also the Times and the Broadcast gives information of who where when and how, much quicker in the article than the Mirror. The article was better researched by the Times for example the papers refers to "interviewing local residents" who spoke of there shock while the Mirror interviewed a pensioner who saw a "dirty maroon car driving past" his window, this was also the last part of the report while the Times final quote was, "It's a terribly frightening incident. ...read more.

The information on what the body had on her/carried at the time is very brief in some places, for example the Broadcast tells the viewer, " She was wearing jogging clothes" it's kept brief and very simple. The Mirror describes what the women was wearing, "She was wearing a green fleece and black leggings". The Times tells the reader in greater detail what the women had on, " Black leggings a green fleece top and grey trainers and was carrying a set of house keys" the fact she had a set of house keys on her, I feel is an important detail missed out by the Mirror and the Broadcast. The tone of the times and the BBC Broadcast is informative. The information that is presented by the newspaper and the Broadcast is very sophisticated, whereas with the Mirror the tone is sensationalised, with simple vocabulary. I think the Times give the most sufficient information out of the three sources of information on the story. The Times gives details on the case its self and how the case is being solved and any evidence that has been gathered so far. Were as the mirror and the broadcast are brief and easier to under stand. I think the broadcast if more entertaining and easy to follow with lots of visual pictorial footage going on all the time. Keeping the viewer occupied constantly. I would say the Mirror is sufficient if the reader just wants to know the brief outline of the story, keeping it simple and short and quick to read. Sarah Prince ...read more.