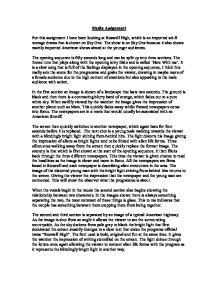 For this assignment I have been looking at Roswell High, which is an imported sci-fi teenage drama that is shown on Sky One. The show is on Sky One because it also shows mainly imported American shows aimed at the younger audiences.

Media Assignment For this assignment I have been looking at Roswell High, which is an imported sci-fi teenage drama that is shown on Sky One. The show is on Sky One because it also shows mainly imported American shows aimed at the younger audiences. The opening sequence is fifty seconds long and can be split up into three sections. The theme tune that plays along with the opening is by Dido and is called 'Here With me'. It is a slow song that is full of the feelings displayed in the opening sequence, I think this really sets the scene for the programme and grabs the viewer, drawing in maybe more of a female audience due to the high content of emotions but also appealing to the male audience with action. In the first section an image is shown of a landscape that lasts two seconds. The ground is black and then there is a contrasting blurry band of orange, which fades out to a pure white sky. When swiftly viewed by the watcher the image gives the impression of another planet such as Mars. This quickly fades away whilst framed newspapers come into focus. The newspapers are in a room that would usually be associated with an American Sheriff. ...read more.

Two official post mortem photos are shown on a polished wood table. The top photo shows a torso of a white male bearing a burnt marking of a hand over the heart. The mans head is half hidden by shadow thus giving the spectator a larger impression of death as the head appears to be that of a skeletons. The shot quickly changes to the girl that was shown in the relationships earlier, she is slowly lowering her top to cover a handprint on the right hand side of her stomach that is similar to that on the corpse. This allows the onlooker to also connect alien behaviour with the girl. At the same time as she is slowly lowering her top the girl is looking upwards towards the screen as though she is looking back at her reflection in the mirror. More images of the couple being separated by glass are shown before an image of the same girl is shown looking anxious and frightened. Her real name is shown on the bottom left of the screen in the same font as the programme name that is portrayed between sections two and three. The male character is then shown in the same scene walking away from her towards the door. ...read more.

The music reaches its climax when showing the characters, as this is when most of the emotions are shown. The first two characters are next shown once again looking through the glass at one and other. The lighting that has been used gives the characters skin a blue tone making them look unnatural connecting with the theme of aliens. The final scene shows the young girl standing at the end of the corridor looking lost. At the opposite end a bright light is shining once again allowing the viewer to connect the programme to extraterrestrial life forms. When the couple is desperately running away from the car the music begins to calm down mimicking the music first heard at the beginning, also by slowly relaxing it prepares the viewer for the beginning of the programme. After watching a small section of the programme, I have noticed that in actual fact the programme is just like what the opening sequence prepares you for. It's a teenage drama with a science fiction twist that has all the emotions that you expect to see from the opening. One thing that the opening does not show is all the relationships. There is more than is shown in the opening but this makes the programme more interesting as something happens that the opening sequence did not prepare you for Lots of love Tanya Appleyard any good?? . ...read more.