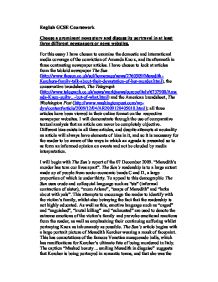 For this essay I have chosen to examine the domestic and international media coverage of the conviction of Amanda Knox, and its aftermath in three contrasting newspaper articles.

English GCSE Coursework Choose a prominent news story and discuss its portrayal in at least three different newspapers or news websites. For this essay I have chosen to examine the domestic and international media coverage of the conviction of Amanda Knox, and its aftermath in three contrasting newspaper articles. I have chosen to look at articles from the tabloid newspaper The Sun (http://www.thesun.co.uk/sol/homepage/news/2760509/Meredith-Kerchers-family-talk-about-their-devastation-of-her-murder.html), the conservative broadsheet, The Telegraph (http://www.telegraph.co.uk/news/worldnews/europe/italy/6737900/Amanda-Knox-guilty...-but-of-what.html) and the American broadsheet, The Washington Post (http://www.washingtonpost.com/wp-dyn/content/article/2009/12/04/AR2009120405010.html); all three articles have been viewed in their online format on the respective newspaper websites. I will demonstrate through the use of comparative textual analysis that an article can never be completely objective. Different bias exists in all three articles, and despite attempts at neutrality an article will always have elements of bias in it, and so it is necessary for the reader to be aware of the ways in which an agenda is presented so to as form an informed opinion on events and not be clouded by media interpretation. I will begin with The Sun's report of the 07 December 2009. "Meredith's murder has torn our lives apart". The Sun's readership is to a large extent made up of people from socio-economic bands C and D, a large proportion of which is under thirty. ...read more.

How reliable was the DNA evidence? Was Rudy Guede, already convicted, the sole killer?"), is deliberately sowing doubt amongst its readership by presenting argument as fact, and thus providing the reader with ammunition to dismiss or at the very least question Knox's alleged guilt. The article begins by describing the "ingredients" that culminated in the murder of Kercher and trial of Knox, which in turn suggests a planned and calculated attempt by the media to portray Knox as a killer. The calculation of the "recipe" metaphor suggests that Knox has been caught by a plan outside of her control. Contrasting and conflicting adjectives are used throughout the opening paragraph, "laborious... gung-ho... titillating...grotesquely". These paint a deliberately dramatic and exaggerated picture of events at their most theatrical. This proliferation of adjectives is alienating, encouraging the reader to draw back a little from the "official story" and be more critical. The Telegraph describes Knox's reaction to the news of a guilty verdict as "Amanda Knox collapsed sobbing into the arms of her solicitor... shaking uncontrollably, she screamed: ("No, no")". The initial response of the reader would probably be negative. The immediate reaction might be to dismiss Knox as a hysterical and psychotic woman bent on seeking attention. However, when viewed as a whole with the rest of this broadly positive piece it becomes altogether more sympathetic. ...read more.

The focus of The Sun's article is Meredith Kercher's family in the aftermath of her death. This is a human interest piece, its primary focus being the human suffering of the victim's family rather than the trial. This article has been written so to as appeal to an uneducated and populist readership, who seek entertainment above all else (although it may appear cynical to refer to The Sun's piece as a tool for generating entertainment, this is their aim). The focus of The Telegraph is the re-examination of evidence and a reconsidered evaluation of events prior to and subsequent killing of Kercher. Though this is an opinion piece, it does have subtle elements of investigative journalism. It demonstrates this is shown through the suggestion of Knox's innocence, contrary to the orthodoxy of general public opinion. This article is designed to appeal to an intellectually sophisticated reader; this is seen through its subtle intentions and varied vocabulary. The focus of The Washington Post is the factual representation of the event, and of the three is the most neutral in its portrayal of the perpetrators. However it does display elements of bias towards Knox, and in so doing appeals to the American patriotic and nationalistic reader. These examples underline the importance of using more than one media source, and to be aware of the subtle influences which underpin the presentation of media issues. ...read more.