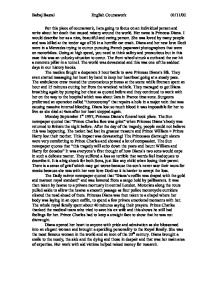 For this piece of coursework, I am going to focus on an individual person and write about her death that caused misery around the world. Her name is Princess Diana. I would describe her as a nice, beautiful and caring person.

For this piece of coursework, I am going to focus on an individual person and write about her death that caused misery around the world. Her name is Princess Diana. I would describe her as a nice, beautiful and caring person. She was loved by many people and was killed at the tender age of 36 in a horrific car crash. Diana and her new love Dodi were in a Mercedes trying to outrun pursuing French paparazzi photographers that were on motorbikes. Going at high speed, you need to think safety and precautious but in this case this was an unlucky situation to occur. The front wheel struck a curb and the car hit a concrete pillar in a tunnel. The world was devastated and this was one of the saddest days in our history books. The medics fought a desperate 3 hour battle to save Princess Diana's life. They even started massaging her heart by hand to keep her heartbeat going at a steady pace. ...read more.

They suffered a loss so terrible that words feel inadequate to describe it. It is a big shock for both Sons, just like any child when losing their parent. There is a sense of grief which may get worse because the son's never saw their mum for weeks because she was with her new love Dodi so it is harder to accept the loss. The Daily mirror newspaper quoted that "Diana's coffin was draped with the gold and maroon royal standard" and was lowered from a cargo hold by pallbearers. It was then taken by hearse to a private mortuary in central London. Motorists along the route pulled aside to allow the hearse a smooth passage as four police motorcycle outriders cleared the road ahead of them. Princess Diana was then taken to a chapel where her body was laying in an open coffin, to spend a few private emotional moments with her. The whole royal family spent about 40 minutes saying their prayers. Prince Charles thanked the medical team who tried to save his ex wife and this shows he still had feelings for her. ...read more.

An example of Diana's caring and compassionate nature was when she spread happiness on a royal visit to a Hindu temple in North West London and it helped bring the community together to help stop racism and to treat people the same by not judging their colour. This was the day I was getting changed for a wedding. It was my family and I watching the television carefully at 6am in the morning, showing the footage of the crash. I was in shock and could not believe it occurred. After the day went on and I was traveling in the coach on my way to the wedding, I felt nervous and hoped we have a safe journey there. As they day went by and I got to my destination in peace, the clouds gathered up in swirls. There I saw a big struck of thunder and it poured down heavily with rain. I imagined it was gods cry for Diana's death and this made me realise how much your mother means to you. I decided to give her a big hug and hoped the same incident would not happen and not loose my parents. Balraj Basrai English Coursework 01/11/02 ...read more.