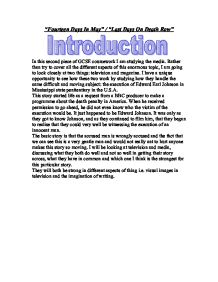 "Fourteen Days In May" / "Last Days On Death Row" In this second piece of GCSE coursework I am studying the media. Rather than try to cover all the different aspects of this enormous topic, I am going to look closely at two things: television and magazine. I have a unique opportunity to see how these two work by studying how they handle the same difficult and moving subject: the execution of Edward Earl Johnson in Mississippi state penitentiary in the U.S.A. This story started life as a request from a BBC producer to make a programme about the death penalty in America. When he received permission to go ahead, he did not even know who the victim of the execution would be. It just happened to be Edward Johnson. It was only as they got to know Johnson, and as they continued to film him, that they began to realise that they could very well be witnessing the execution of an innocent man. ...read more.

It is stronger that the media piece in some ways and weaker in others: The film is pure reality, like said before, it is non stop and there are no re-takes, the film is presented in the order it was filmed in and there is no acting involved, this may also add an element of strong emotion for the viewer (may it be sadness for Edward or hate for the racist people who got him there in the first place) because they know that this is a true story and that everything will not be a happy ending and that the Edward actually dies. The television is stronger that the media in this way as well as others: The film is a visual medium that (unlike the media) can show the viewer what is happening (again adding to the emotion) because the viewer gets the sense of almost being there with Edward and the crew, there are lots of images of captivity and imprisonment, often there ...read more.

an actual image of what is happening, this could be considered a attribute and an advantage instead of a flaw as the media (or magazine article) can give the reader a chance to let their imaginations play a roll in the imaging of what they are reading, they could imagine Edward as the nicest person in the world in their heads and the guards and racist people as horrible "ugly" people, and then when they hear the story of the man in the chamber faking choking on the lethal gasses that are produced, the reader can think of the surroundings as whatever they want making it seem a more horrible place in their imaginations, the media is also strong in the way that it can let the reader know in an organised manor what happened and in what order because, unlike the TV series it can be edited and re-written before it is published making the word more neat and giving the layout a more organised setting making it easier for the person to read ...read more.