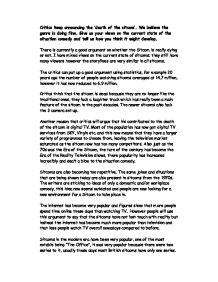 Critics keep announcing the 'death of the sitcom'. We believe the genre is doing fine. Give us your views on the current state of the situation comedy and tell us how you think it might develop. There is currently a good argument on whether the Sitcom is really dying or not. I have mixed views on the current state of sitcoms; they still have many viewers however the storylines are very similar in all sitcoms. The critics can put up a good argument using statistics, for example 20 years ago the number of people watching sitcoms averaged at 14.7 million, however it has now reduced to 6.9 million. Critics think that the sitcom is dead because they are no longer like the traditional ones, they lack a laughter track which has really been a main feature of the sitcom in the past decades. ...read more.

The writers are sticking to ideas of only a domestic and/or workplace comedy, this idea now seems outdated and people are now looking for a new environment for a Sitcom to take place in. The internet has become very popular and figures show that more people spend time online these days than watching TV. However people will use this argument to say that the sitcoms have not lost touch with reality but instead the internet has become much more popular than television and that less people watch TV overall nowadays compared to before. Sitcoms in the modern era have been very popular, one of the most notable being "The Office", it was very popular because there were two series to it, usually these days most British sitcoms have only one series. ...read more.

"Peep Show" won the best situation comedy award for 2008. I think that the situation comedy will need to be developed otherwise it may end up dieing out. First off the sitcom needs to think of new situations to investigate because the jokes are becoming too repetitive in my opinion and people are now easily becoming bored because of this. I also think that situation comedies will use other means of media to broadcast the future, as stated before, the internet has become very popular and I think that producers should make good use of it by broadcasting sitcoms on sites such as YouTube. I believe that sitcoms for teenagers are currently lacking, I think that the situation comedies can develop by making teenagers their target market. Then they can advertise and broadcast their on social networking sites such as Bebo and MySpace which are very popular among teenagers, this is sure to help them to keep the sitcom alive. ...read more.