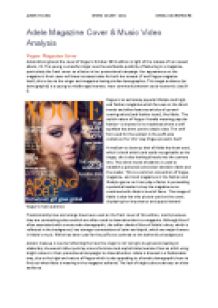 ﻿JAMES YOUNG WORD COUNT: 1161 MEDIA COURSEWORK Adele Magazine Cover & Music Video Analysis Vogue- Magazine Cover Adele Atkins graced the cover of Vogue?s October 2011 edition in light of the release of her newest album, 21. The young, successful singer uses the worldwide publicity of featuring in a magazine- particularly the front cover- as a factor in her promotional campaign. Her appearance on the magazine?s front cover will have increased sales for both her newest LP and Vogue magazine itself; this is due to the singer and magazine having similar demographics. This target audience (or demographic) is a young to middle-aged woman, most commonly between socio-economic class B-D. Vogue is an extremely popular lifestyle and high-end fashion magazine which focuses on the latest trends and often features articles of up-and-coming artists (and fashion icons), like Adele. The stylish nature of Vogue- literally meaning popular fashion- is showed in its masthead where a serif typeface has been used to depict class. The serif font used for the subtext in the puffs also evidences the ?chic? way Vogue presents itself. ...read more.

In turn, the anchorage text underneath, ?Hometown girl goes global?, whilst cleverly using play-on-words by linking the line to one of Adele?s first singles ?Hometown Glory?, demonstrated how Adele is keen to show that anyone can become a sensation globally, like she has. The artist has always been eager to make references to her hometown often in her music and this is reflected in this subtitle chosen. Persuading a potential reader into buying the magazine, buzz words have been used including ?man of the moment? and ?essentials?. These word choices are effective in forcing the reader to believe that they need the product featured as it is classified as an ?essential? by Vogue. Rolling in the Deep- Music Video Analysis Winner of three prestigious 2012 Grammy Awards including Song of the Year, ?Rolling in the Deep? has arguably become Adele?s signature song. Having been recently certified as the highest selling digital song by a female artist, the song?s accompanying video has been watched over a quarter of a billion times on YouTube. Receiving seven MTV Video Music Award nominations, the ?Rolling in the Deep? video has become Adele?s most critically acclaimed yet. ...read more.

Becoming a more commonly used convention in modern music videos, artists often depict the story they are telling throughout their song via use of stark metaphors during their video. The visuals used in ?Rolling in the Deep? are often metaphorical and not strictly blatant, although are often used to reinforce, magnify and reiterate the lyrical meaning. Flowing with the heavy drumbeat of the song, the (most commonly midshot) shots change rapidly in time with the beat. This form of editing is common in narrative videos because it is emotive; as the song?s beat and tempo changes the editing reflects this. The editing is fastest during the chorus, where the beat is fastest. Because Adele is the central figure featured, her shots are often close-ups so the singer is easily recognisable. The camera is mostly sturdy and panning shots are rarely used. However, as most of the shots focusing on Adele are close-ups, panning shots are used when retreating from the singer to show the full set, further emphasising how alone Adele is. Like in her Vogue magazine editorial, Adele is portrayed as a young, sophisticated and relatable lady dressed in simplistic black attire in the video. ...read more.

An excellent analysis. This student has done well because they have consistently used media language throughout the essay. Reference to media theory, eg. Dyer's star theory would help to improve improve further.
****