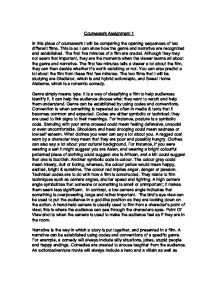 Coursework Assignment 1 In this piece of coursework I will be comparing the opening sequences of two different films. This is so I can show how the genre and narrative are recognized and established. The first five minutes of a film are crucial. Although they may not seem that important, they are the moments when the viewer learns all about the genre and narrative. The first few minutes tells a viewer a lot about the film, they can then decide whether it's worth watching or not. You can also predict a lot about the film from these first few minutes. The two films that I will be studying are Gladiator, which is and hybrid action/epic, and Sweet Home Alabama, which is a romantic comedy. Genre simply means type. It is a way of classifying a film to help audiences identify it. It can help the audience choose what they want to watch and help them understand. Genre can be established by using codes and conventions. Convention is when something is repeated so often in media & texts that it becomes common and expected. Codes are either symbolic or technical; they are used to link signs to their meanings. For instance, posture is a symbolic code. Standing with your arms crossed could mean feeling defensive, unsocial or even uncomfortable. Shoulders and head drooping could mean sadness or low self esteem. What clothes you wear can say a lot about you. A ragged coat worn by a character may mean that they are poor and possibly hungry. ...read more.

Jake has never stopped loving her, and it is clear that she still feels something for him too, but the situation becomes even more complicated when Andrew arrives from the city for a surprise visit and finds out the truth. Melanie will have to decide is she's really a big city businesswoman or an old-fashioned Southern girl. At the wedding, while she is about to get married to Andrew, her lawyer turns up and they realize that though Jake signed the papers, she, however did not. When they eventually find a pen, she finds that she cannot sign the papers. She has to turn her fianc� down. This does not go down well with his mother. However, in the end like a typical romance film, she and Jake get back to together. In Gladiator there are many codes and conventions which lead us to say that it is an action/adventure epic. It is a hybrid; this is where two different genres are combined. At the beginning of the movie, when Maximus is running his hand through the wheat, a close up of his hand is shown. This tells us a lot about him, firstly that he is a married man; the ring on his finger indicates this. We instantly know that he is a roman because of the wrist band he is wearing. Another thing we realize is that he has children; this is because of the laughter in the background. We can also tell that he is a farmer because of the wheat, and what his hands are like. ...read more.

In conclusion I think that the first few minutes of a film tell you a lot, they almost lay out the rest of the film for you. The genre and narrative are useful both for producers, who can apply a genre's conventions, and audiences, who can profit by knowing their expectations of the genre. Genre helps to sell the film, give the audience what they expect, give the film an identity and to avoid disappointment. Conventions and Codes (Symbolic & Technical) establish genre. Once the genre is established then the audience has an idea about the narrative. The opening sequence establishes the hero and villain as well as the genre. Knowing this the audience will understand the basic narrative. In Gladiator something bad is done to our hero and the film then follows our hero's quest for justice and revenge. The hero will face several challenges but in the end he will win and deflect the villain. Sweet Home Alabama also has a basic narrative, girl & boy in love but girl moves on and leaves. Girl meets someone new who is well off and intends to marry him. However they come from completely different backgrounds and it's obvious they are not right for each other, also his snobby mother disapproves. However something happen and the girl realizes she loves boy and return to her true love. The audience is made to like the boy and have to wait and see who the girl chooses. It has a happy ending. I enjoyed both films despite how different the genre and narratives were. ...read more.